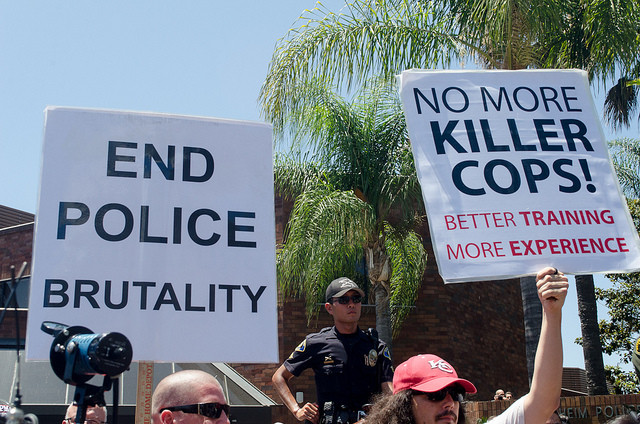 The officer in this story was removed from his job.

On April 7,2016 at Rhodes Middle School In Texas, there was incident with two sixth graders  arguing and talking trash about each other. The school principal came up to them and told them to separate. When they didn’t, the principal indicated the police officer  to stop the fight. The officer grabbed one of the girls and slammed her against the floor.  The crowd of students stood quiet in disbelief. One of the students said, “Janissa! Janissa, you okay?” “She landed on her face!” The officer proceeded to handcuff her and escorted her from the area.

In the second video of the post, we can see how Janissa and her mom talk about the incident. We see that Janissa has a bruise on her forehead and her eyebrow. Her mom talks about how the police officer could have grabbed her and removed her from the fight, but instead picked her up and hurt her.

This video of the girl being slammed into the floor is just one of many videos that you can find on the internet of police brutality. Abuse of authority is something that this country is suffering from. Not all police are bad and certainly we need police to keep our communities safe but too many police officers are overwhelmed with the power they have and often abuse it. I think this particular officer should be arrested for hurting the girl when there was no need to hurt her in order to stop the fight.  Nobody should be above the consequences of the law.