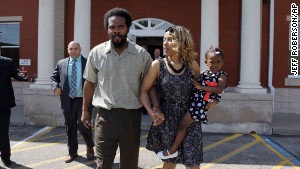 Back in 1999, Mike Anderson was arrested for robbing a Burger King in Missouri. He was sentenced to 13 years in prison for his crime but it was never served. After his appeals ran out in 2002 he was supposed to report to prision, but the call never came. Courts and the Mississippi House of Corrections were convinced that Anderson was already in custody. After years passed, they finally caught the mistake within the criminal justice system.

Anderson reported to court after the mistake was found and Judge Terry Brown stated “I believe continuing to incarcerate you serves no purpose, would be a waste of taxpayer dollars and punish a good man.”

Though when he was free he did give back and become a tremendous citizen. In his 13 years of being free with an incarceration hanging over his head Anderson gave his life to the lord, started several construction businesses, coached his son’s baseball team, and help in his community church. He said he wanted to prove that he wasnt the person he made himself seem to be in 1999.

This has been my favorite current event to do. I just think its amazing that as soon as he was fortunate, or lucky I should say, to get this opportunity he took advantage of it. The only thing on his mind was to make hiself a better person. I believe that if he went to prison it would have ruined the mentality he has. He wanted to prove that his crime did not define who he is as a person. It was just a mistske he has learned from. He was blessed to have something so rare like that happen to him. I am glad that it was granted to the right person.