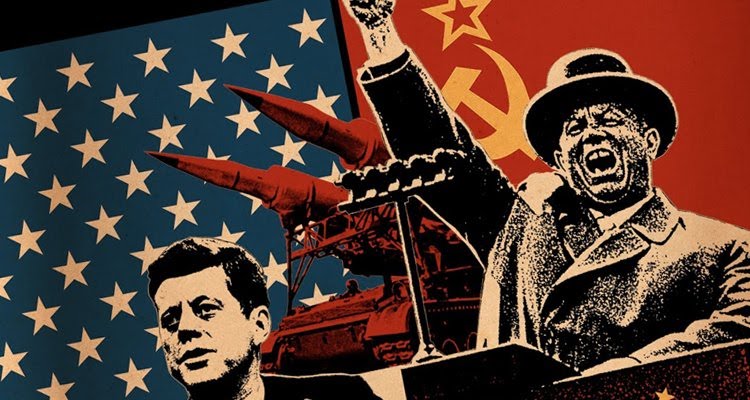 Kennedy and Kruschev faced off in brinksmanship with the Cuba crisis.

The 1960’s was a very eventful decade. Hippies on the loose, civil rights activists fighting for equal rights, Kennedy assassinated, the war in Vietnam impacting many US citizens, etc. The 60’s was at it’s peak of full on competition between the two main superpowers that caught the whole world’s attention. Tensions between the Soviets and Americans were skyrocketing. Three big events that caused early tensions over the roof are the Vietnam War, U-2 US spy plane shot down by the USSR, and lastly the Cuban Missile Crisis.

The Vietnamese War was the first maj0r war we lost due to the fact that Vietnam had a lot of infantry and was backed up by communist Russia and China. Many US citizens were dying in this jungle war, as well as thousands of people were protesting and fighting in the streets which caused Americans to pull back support of the war. After pulling back, America had a big loss of self-esteem and the citizens realized the evils could come within the country instead of outside. We experienced the evils through assassinations of John F. Kennedy, Robert Kennedy and Martin Luther King.  This showed the tensions that rose within the country and outside.

Another event that created tension was an act espionage in 1960, specifically the shooting down of Gary Powers in his U2 spy plane.  I am trying to show the tensions between United States and the Soviet Union. The plane was spying over the Soviet Union with technology to zoom in and see and hear the Russians.  The Soviet Union was very aggressive and were able to shoot it down.  Gary Powers was captured and became a prisoner of the Cold War.

The last event that brought high tensions between Soviet Union and the Unites States was the Cuban Missile Crisis.  The Russians were competing with us with nuclear weapons.  We spotted Soviet missiles just south of Florida on a island of Cuba.  Fidel Castro was working with the Russians in the 60s and he was in favor of placing the missiles in his country, aiming at the United Sates at any time.  This led to the United States trying to assassinate Castro.  And it led to American ships blockading the Soviet Union from entering Cuban waters by sea.  We also aimed our missiles at the Soviets in their own backyard in the nation of Turkey. Eventually, the Soviets took out their missiles and we removed our missiles from Turkey.