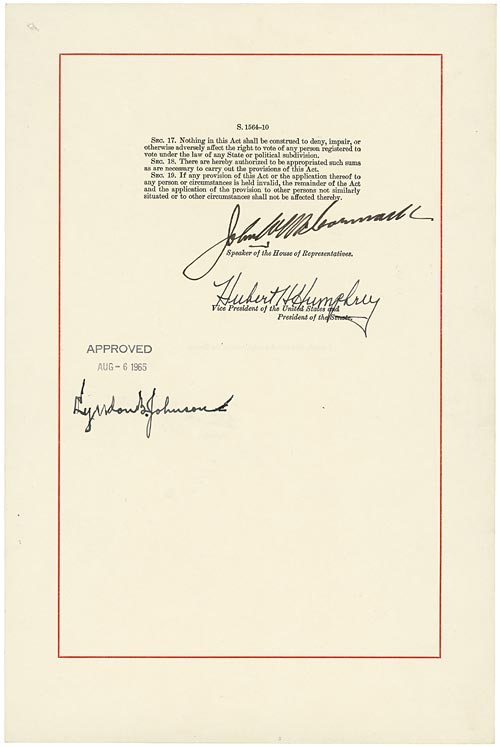 Despite the “Civil War Amendments” ratified during reconstruction in the 1860s and 1870s , before 1965, you essentially had to be a white male to vote in the South. It also required various voting restrictions, including literacy tests, poll taxes, property-ownership requirements, moral character tests, requirements that applicants interpret particular documents, and grandfather clauses that allowed otherwise-ineligible persons to vote if their grandfathers voted (which excluded many African Americans whose grandfathers had been slaves or otherwise ineligible).[ But the Voting Rights Act of 1965 made it possible to vote as said in the 14th and 15th amendment.

This caused widespread African American voting across the nation. The act prohibited racial descrimination when voting. Despite the 15th amendment stating “The right of citizens of the United States to vote shall not be denied or abridged by the United States or by any State on account of race, color, or previous condition of servitude.”

The effects of the act were incredible. Nearly 250,000 African Americans registered to vote in 1965, one-third of whom were registered by federal examiners. African Americans elected as state legislators in the 11 former Confederate states increased from 3 to 176. Nationwide, the number of African American elected officials increased from 1,469 in 1970 to 4,912 in 1980. After Democratic President Lyndon B. Johnson signed the Act into law, newly enfranchised racial minorities began to vote for liberal Democratic candidates throughout the South, and Southern white conservatives began to switch their party registration from Democrat to Republican en masse.