High school students in Virginia were suspended this September for displaying the Confederate flag.  Was the school making a good decision ?

Students from Christiansburg High School  in Montgomery County Virginia showed up to their school wearing images of the  Confederate battle flag and in some cases wrapped in the flag itself.  A total of 23 students were suspended for breaking the dress code. Is this a violation of 1st amendment rights? Do students have equal liberties in school as they do in other public places? Students said that they wore these images because, they have the freedom of expression. They were suspended because  this flag is offensive for some students. Half of the American High schools and middle schools, don’t allow the Confederate Flag symbol. 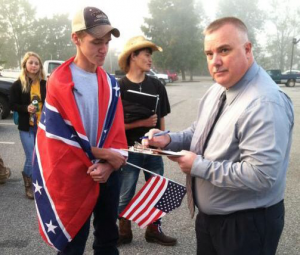 The school authority was justified in this case because of the offensive nature of this symbol.  Our freedoms become limited when they offend fellow citizens. Public actions always affect other people. Every right is limited by the  responsibility to protect other citizens. Most people know the bad history of racism and slavery behind the Confederate symbol. It has become more than just a symbol of cultural pride for southerners because of the history of how people have used it to justify hate crimes. The compromises we make for the common good are a sign of respect and they are necessary in order to keep our social contract.

What do you think? Can the actions of these students be justified or protected?  What is the greater good?