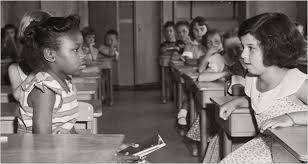 62 years after the U.S. Supreme Court ruled school segregation unconstitutional, the schools in a west Mississippi town are still separated by black and white.  The abandoned Illinois Central Railroad tracks that run through town are the line of demarcation. Half of Cleveland’s schools on the east side of the railroad tracks are all black or mainly all black students.  Majority of the schools on the west side of the railroad tracks, have a population in the schools of at least 20% more white than black.
This court case has been navigating the judicial system for more than 50 years, began when 131 minor children of Bolivar County, through their parents and guardians, filed an action claiming that what is now the Cleveland School District maintained a policy of operating schools “on a racially segregated basis.

“The delay in desegregation has deprived generations of students of the constitutionally guaranteed right of an integrated education,” U.S. District Judge Debra M. Brown wrote in her decision.

“Six decades after the Supreme Court in Brown v. Board of Education declared that ‘separate but equal has no place.  in public schools, this decision serves as a reminder to districts that delaying desegregation obligations is both unacceptable and unconstitutional,” said Vanita Gupta.
I was not aware that places of the united states were still segregating schools after the supreme court case of Brown v. Board of Education in 1954.  I was under the impression that all segregation of ethnicity and races were ended by that supreme court case.  I’m not sure if it is just natural because of how the environment of the town, or they still are trying to keep blacks and whites segregated, ignoring the fact that it is unconstitutional.  This story shows that court orders like laws are only as good as their actual enforcement.  In the case of school desegregation enforcement is mostly done at the local level of government.  The enforcement from a US District judge shows the need for the Federal government in the cases of resistance to basic civil rights.

For the full story from CNN see below:

To find out about other civil rights cases being advocated by the NAACP click here: