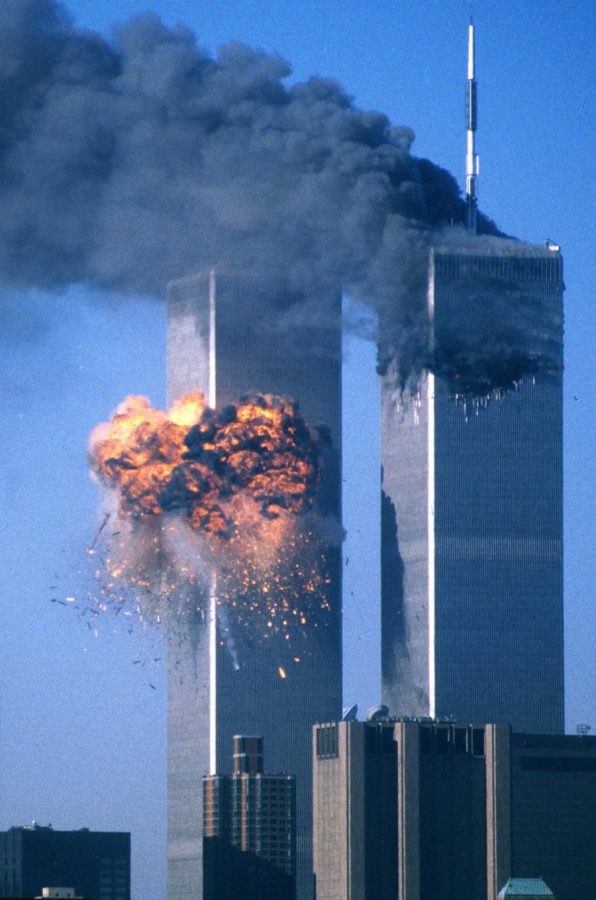 9/11/01 was a very hard day for the USA and the World. On this day religious extremists seized four passenger planes as they were flying over the Mid-Atlantic East Coast cities of the United States of America.  They were a small group of thieves who took advantage of freedoms in the United States, studied to fly airplanes in the United States, listened to terrorist leaders in Al Qaeda, used the planes like huge directed rockets for hitting important buildings in New York City and in Northern Virginia, across the Potomac river from Washington D.C.  The two planes hit the twin towers of the World Trade Center in New York City and fire broke out in the buildings and surrounded the people who were in the high floors and the city drowned in the smoke. After less than 2 hours, the two towers had fallen. The third plane broke the west entrance of The Pentagon, and the fourth plane broke in a field in Pennsylvania after the passengers resisted the hijackers and took control of them.
Who were the attackers?
A Muslim extremist group of 19 men; mostly born in Saudi Arabia known as Al-Qaeda was planning for the attack in Afghanistan led by Osama bin Laden. Al-Qaeda blamed the United States and its allies for the crises and conflicts in the Islamic world.  19 people carried out the hijackings, and they were divided into four groups, three of which included five, and the fourth group included four. Which hijacked the plane that crashed in Pennsylvania. And there is one person of each group who was trained in flight school in the USA

Link: BBC news
How did the United States respond?
less than a month after the attack the president of the USA George W. Bush led an invasion of Afghanistan with the support of an international coalition to eliminate Al-Qaeda and capture Bin Laden. The United States was not able to find out Bin Laden’s whereabouts until ten years after the attacks when American forces were able to locate and kill Bin Laden in neighboring Pakistan under the orders of President Obama.  President Trump continued the efforts to go after terrorist leaders with the death of Islamic State leader Abu Bakr al-Baghdadi . LINK
After 20 Years of War; What Did the USA Lose and Win?
The accused plotter of the 9/11 attacks, Khalid Sheikh Mohammed, was arrested in Pakistan in 2003 and has been held at Guantanamo Bay ever since and still awaits trial. After 10 years they killed Osama bin Laden, the leader of the attack, but the Taliban still exists, and now it is more powerful in sub-Saharan Africa and currently has supporters inside Afghanistan. The cost of the war has risen to nearly $100 billion annually, according to US government figures. Annual spending is about $45 billion.  This brings the total cost in the period between 2001 to 2019 to 822 billion dollars.

A month after the attack, the United States launched airstrikes in Afghanistan in an attempt to eliminate the Taliban and al-Qaeda.  It had strong effects but after 20 years the USA is leaving in 2021. The Taliban who once ruled and protected international terrorists in 2001  are gaining ground with the withdrawal of US and allied forces.  In total, the US killed Osama bin Laden and pushed the Taliban aside for 20 years with the cost of $887 billion dollars.  Like a tide in the ocean the Taliban stepped back for 20 years and they are now flooding the country with their ruling presence once again.
What has the conflict cost the US and its allies?

After this long suffering war, the Taliban wants to enter global diplomacy and many countries don’t have objections.  The Taliban is saying they are changed and they want to share rights with their people currently. The Taliban seeks normal diplomatic relations with Germany. The new leaders of the Taliban want to make strong legal relations with Germany and get some financial support and humanitarian aid.  A group spokesman, Zabihullah Mujahid said for the German newspaper “Welt am Sonntag”

“We desire strong and official diplomatic relations with Germany”.

It is noteworthy that Germany is now counting on holding talks with the Taliban currently. Now we have to admit that the Taliban dealt a severe blow to America and the USA lost many civilians and soldiers, and at this time the U.S military is leaving a big space. The Taliban now control about 80% of  Afghanistan and want to start relations with European and Asian countries. How dangerous is that for the USA? I think many families of the U.S. soldiers as well as civilian victims of terrorist violence are waiting for any update. Should we deal with them like an enemy or give them a chance to build their country under limits? I’m waiting for a response from America.  It is like making a deal with the devil but what choice remains?