“a date which will live in infamy”

The attack brought the United States into World War II and ended U.S. isolationism after being neutral and helping Great Britain. American commanders received a warning but they didn’t think they would go to Hawaii because of the far distance between Japan and Hawaii. 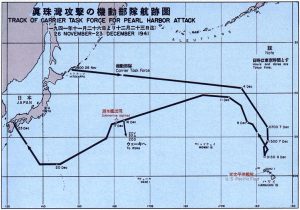 Japan sank or damaged eight battleships, three cruisers, four destroyers, six other vessels, 188 airplanes and killed 2,403 Americans. Roosevelt said it was the most serious crisis since the Civil War. The next day Roosevelt asked Congress to declare war.

The above photo is showing the sinking of the USS battleship Arizona after Japanese war planes dropped bombs on it. This same ship would later become a memorial to all those who lost their life.

“Yesterday, December 7, 1941—a date which will live in infamy—the United States of America was suddenly and deliberately attacked by naval and air forces of the Empire of Japan…..No matter how long it may take us…the American people in their righteous might will win through to absolute victory.” 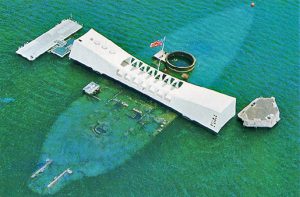 In 1958, President Eisenhower signed the bill that allowed this memorial of the USS Arizona. This is a bridge built over the sunken battleship. Oil leaking can still be seen and sometimes called “black tears” or “the tears of the Arizona”.

This was the biggest disaster by foreigners on American soil up until September 11, 2001.