A View on Learning at Gunston Hall 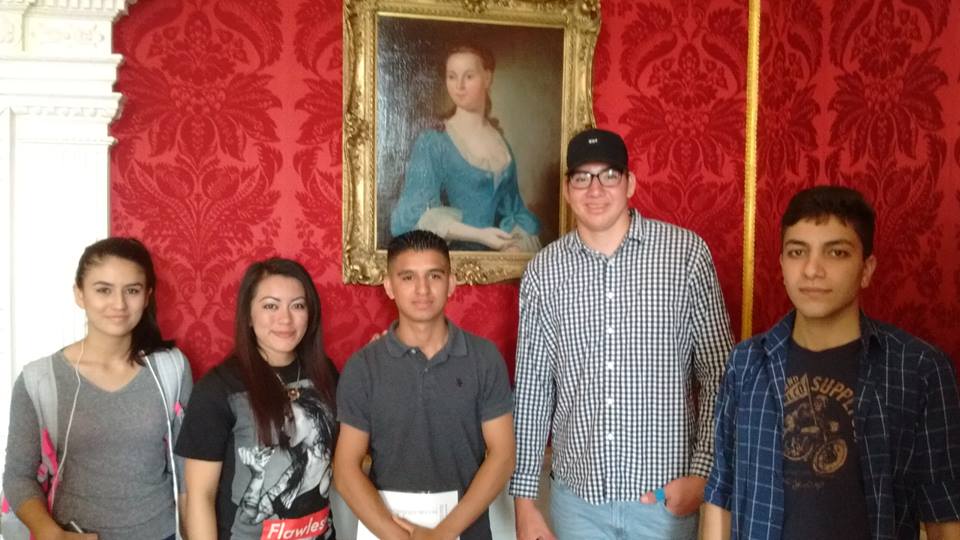 Students were impressed with the beautiful architecture as they stood for a pose in front of a portrait of Mrs. George Mason in the parlor room.

When students experience history they remember it differently.  June 14th 2017 was a day of enlightenment and learning for 40 students and 8 teachers on the estate of one of Virginia’s founding father’s; George Mason.

Students were surprised by how much land and river access at the estate known as Gunston Hall.  Our guide explained that the Potomac River was the I95 of the day.  George Mason was a successful businessman but he saw his real mission as a public servant.

He was born George Mason IV in Fairfax County , VA on 11 December 1725.  He married 16 year old Ann Eilbeck in 1750 from a plantation in Charles County, Maryland.  They lived in a house on George’s property in Dogue’s Neck, Virginia.  Together they had 12 children but only 9 lived and the last two twins died and then she died on the 9th of March 1773.  He remarried to Sarah Brent of Stafford County, Virginia in 1780.

He was wealthy so why not a bigger house?

What we learned was wealth in the 18th century translated to property and profit in the world of global overseas trade.  The design and materials of the house showed money and the size was big for the time period.

The estate of Gunston Hall was completed  as  a plantation house on the Potomac River in 1759. It was an “architectural gem” of the time period and it was designed and built by indentured servant  William Buckland; and William Bernard Sears.

The house showed global influences of the 18th century British imperialist.  It had silver utensils on the table, glassware, porcelain from China and the Renaissance styles as shown on the red silk wall of the parlor.  All the woodwork in the side rooms of the house is preserved and original from restoration.  The great room was refurbished to look like the original design.

The kitchen reminded me of Guatemala and my grandmother!

The kitchen was well stocked with tools and supplies.  It even had a rotisserie chicken smoker.

So if he had 90-100 slaves then how did he get the idea to create individual rights?

We learned that it was only the wealthy white property owners that had any concept of equal citizenship.  English enlightenment philosopher John Locke said that all “men” had the “natural right” to property and this was a strong influence on the British thought about democracy.

How would the people believe him or trust him if he owned slaves?

Owning slaves was seen as a natural consequence of wealth during that time.  We think of equality for all today but just the idea of equality of any kind and for any group was new to the founding fathers.  George Mason owned 90-100 slaves at any given time and he never once thought of freeing them as he wrote up his ideas that would become the foundation of the modern civil rights movement. Despite continuing in the ownership of slaves he expressed strong discontent with the existence of slavery in his words.
All men are born equally free and independent,”Mason began,” “and have certain inherent natural rights, of which they can not by any compact, deprive or divest their posterity; among which are the enjoyment of life and liberty, with the means of acquiring and possessing property, and pursuing and obtaining happiness and safety.”  http://www.gunstonhall.org/georgemason/essays/warren_essay.html

Slavery is a slow poison which is daily contaminating the minds and morals of our people. – George Mason

Students also learned about the influential ideas of George Mason. He did not agree with signing the Constitution because he said it was unfinished – The Anti-federalists were worried about monarchy.