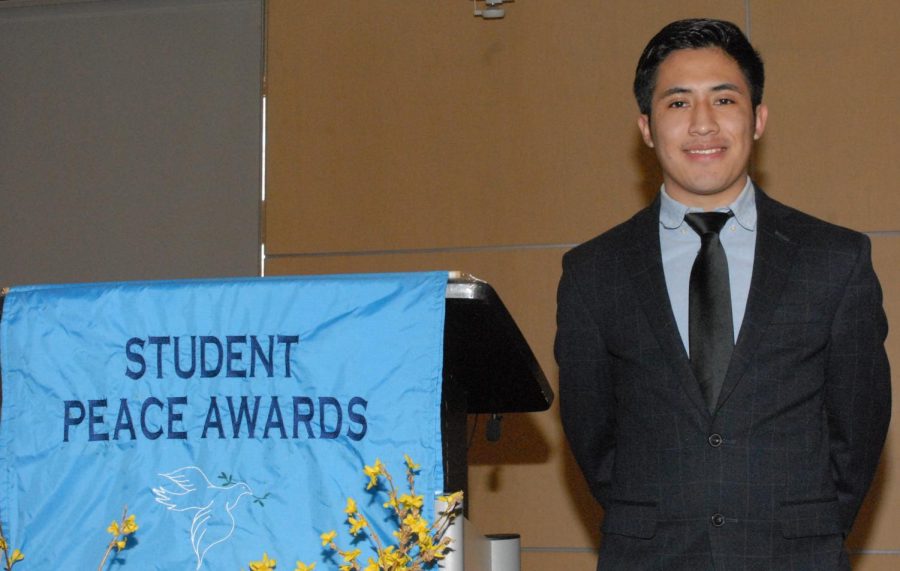 Senior Brayan Geronimo Perez Brito was selected to receive the 2018 Student Peace Award of Fairfax County.  For 16 years the Student Peace Awards has honored high school students who have promoted peace or worked to remove the causes of violence, such as injustice, discrimination, and poverty.  The 24 recipients, consisting of both individuals and groups, were honored at a public reception on March 11.

When Brayan came to the US from Guatemala in 2014, he spoke almost no English, experienced the challenges of being undocumented, and had no family support.  His mother was a member of the Ixil-Mayan population, and he grew up surrounded by gang violence and civil war.

Brayan felt motivated to stand up for himself.  As a result, he was ostracized by some members of his family and endured attempts on his life.  At age 16, unable to receive help from the local police, he ran away on a journey that would take him 70 days to complete.  Brayan received asylum in the US two years later.

Seeking part-time employment and the opportunity to learn English, Brayan joined the Centreville Immigration Forum. The Forum provides a safe place where people can receive educational and vocational training, and where work agreements can be negotiated between local contractors and day laborers.

Brayan’s skills in English have greatly improved, and he has become a leader at the Forum, representing his people in many events such as the US World Meeting of Popular Movements in Modesto, California.  The gathering brought together hundreds of grassroots leaders who are working to create an “economy of inclusion,” that addresses care for the environment, dignity of workers, living wages, housing, and eliminating racism.

According to School Counselor Ellen M. Fay, “All of Brayan’s efforts are aimed at lifting up the dignity and worth of every human being.  His ultimate goal is to bring about a world where peace thrives as each person finds his or her worth and value in our society.”

– This story was submitted by Margaret Rogers of the FSPA.

Below is a link to the Fairfax Student Peace Awards organization and a recent video published by FCPS.