Accountant of Auschwitz goes to trial 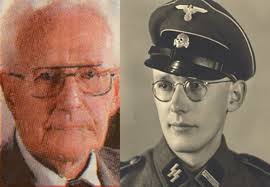 93 year old, Oskar Groning, also referred to as “the accountant of Auschwitz’ was the man in charge of confiscating luggage from the prisoner who were arriving in Auschwitz. Groning charged with complicity in the murder of 300,000 Holocaust victims, is standing trial in the north German town of Lüneburg.
“I would like him to acknowledge in front of the court that he realises what it means that he was even in Auschwitz in the first place, let alone that he probably took the luggage from some of the 49 members of my family who were murdered there,” said 90-year-old Eva Fahidi from Budapest who was sent to Auschwitz as a teenager, and last saw her mother and 11-year-old sister on the ramp at Auschwitz-Birkenau. “I am very interested to hear what he has to say, and whether he admits that he helped support the death machinery,” she said.

Although it’s been over 60 years (he was 20 when he joined to be a SS guard) he is still haunted by the images left in his mind. He admits he was aware of everything that was going on, how they were murdering the prisoners, he claims he had no part-take in that but was only to take away valuable belongings from the prisoners. Groning feels remorse, as does Germany for what they did. Groning worked in the prisoner property administration, meaning he was responsible for removing the luggage of passengers left on the unloading ramps – after they had been “selected” into groups of who was going to the gas chambers and who was being sent to slave labor. These belongings were supposed to be removed as quickly as possible, so that newcomers to the camp would not suspect the fate that was about to befall them. At that time, with the end of war nearing, the aim was to murder as many prisoners in as short a time as possible and as a result the camp was operating day and night without a break.

Groning said: “I see it as my task, now at my age, to face up to these things that I experienced and to oppose the Holocaust deniers who claim that Auschwitz never happened … I want to tell those deniers I have seen the gas chambers, I have seen the crematoria, I have seen the burning pits – and I want you to believe me that these atrocities happened. I was there.”

“Now at my age”? This is something he should have faced up to years and years ago. I respect that he admits to what he did but even if he claims he didn’t commit any murders nor ever took anyone to the gas chambers, he still volunteered to be part of that camp, to hide the belongings of others. To me, he is just responsible for those who did commit murders.

At his age, I feel bad for him going into trial; or maybe even be put to jail during his final years of his life but he was the one who decided to speak up at this time.  It demonstrates that seeking justice can take a lifetime and often brings personal change to the offender’s perspective as much as a need for the victims to have some element of forgiveness and mercy.  A terrible crime such as this without forgiveness will tear up the lives of survivors with anger, hatred and revenge.

“It has meant that many survivors have been living with the pain for 70 years of knowing that perpetrators have got away with the excuse of saying: ‘I was only following orders’. With this trial they have the chance to retrieve some of their dignity and to have a voice on behalf of their relatives, because they are finally being taken seriously by the German justice system.”