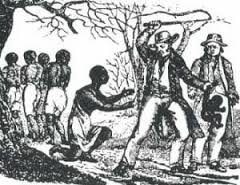 Americans have always been involved in trade with the world. They traded gold, salt, slaves, and other things among those. The Jamestown settlers bought 20 African men as servants not slaves in 1619. Years later, enslaved Africans were being brought into the American colonies by the thousands to supply plantation labor. Some of the earliest Africans brought by the Dutch to Jamestown were actually treated as indentured servants; this meant that they earned their freedom over time. In the 1400s the Portuguese sold and bought slaves for sugar off the coast of Africa. In the 1500s the Spanish brought slaves to America and Central America for the enconmienda of forced labor.

In 1619 slaves started being brought in, and almost 250 years later Virginia fought over the economy of slavery. This was believed to be the major cause of the civil war. Slavery quickly spread to the southern colonies from Maryland to Georgia. Early on, indentured servants preformed colonial labor, but were eventually freed from their contract. They found servants a better bargain then slaves, but slavery started to grow and by 1640 indentured servants were being treated different then other whites. By 1770 the British colonist where fully invested in the practice of slavery.

It is ironic to think about independence and liberty in our country when at the same time slavery was still going on in the south. The southern planters didn’t want to pay taxes.   Liberty in the south meant owners could make a profit without paying taxes to the king.   They continued to have slaves. We called ourselves the United States but in reality they were not united because each colony had a different idea of liberty.