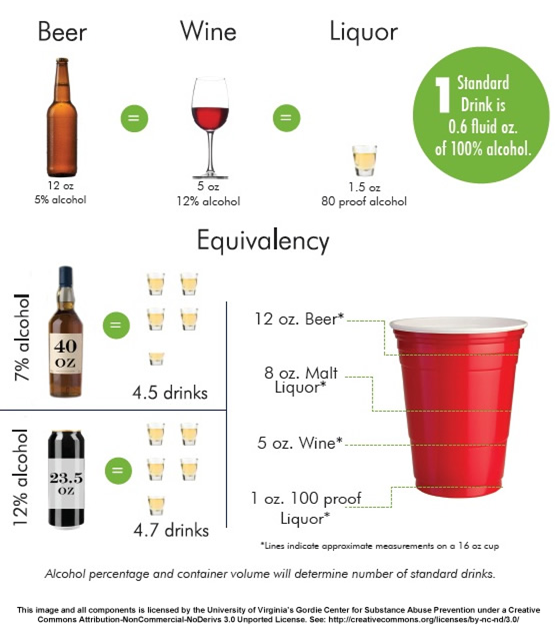 Alcohol is one of the most used and abused substance in America. An alcoholic beverage is a drink that contains ethanol. Alcoholic beverages are divided into three general classes for taxation and regulation of production: beers, wines, and liquors.
Most people drink because they are trying to fit in, depression, to relax, peer pressure, can’t take reality, and plenty more. A lot of people believe they are not an alcoholic, because they work & pay bills. But Little do they know that is called being a functioning alcoholic. Some signs of Alcoholism are if you’re having to drink before or during work, lying, stealing, shaking when sober, irritability and more. Alcohol abuse means having unhealthy drinking habits. Drinking everyday starts to ruin relationships and interferes with work. If you continue to drink even though you know its causing problems that is alcohol abuse. You get physically and mentally addicted to it if you abuse it daily, which is called Alcohol dependence, and is also known as alcoholism.
Here are a few facts that I found about alcoholism in America: Almost 80% of high school students have tried alcohol, In 2010, there were approximately 189,000 emergency rooms visits by people underage for injuries and other conditions linked to alcohol.
http://www.alcoholaddiction.info/alcoholism-statistics.htm
“Once an alcoholic, always an alcoholic.” a wise women once told me. Alcohol is so harmful for people if used in the wrong way. if you must have a drink everyday, you shouldn’t have to think about if you’re an alcoholic or not, because you are since you drink everyday. Even when you drink occasionally you can still be alcoholic.  Alcoholism is a disease that has killed many people. Alcohol after a while starts to warp your brain from the reality of life.  If you know it runs in your family, you should try your best to stay away from that path, because it is very addictive and can take a bad total on your life.
Drinking is not a coping mechanism because your problems are still there once you sober up, the alcohol doesn’t erase your problems, it just makes more.
Why is alcohol legal if it ruins so many people’s lives? Historically we tried to outlaw it by ratifying the 18th Amendment but then it was reversed with the 21st.  It makes me think that the government can not regulate all aspects of peoples lives.  Some laws need to be personal instead of public.
Delete Image
Align Left
Align Center
Align Right
Align Left
Align Center
Delete Heading