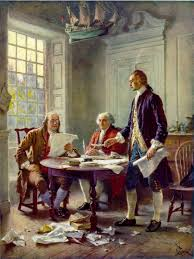 We hold these truths to be self-evident, that all men are created equal, that they are endowed by their Creator with certain unalienable Rights, that among these are Life, Liberty and the pursuit of Happiness.–That to secure these rights, Governments are instituted among Men, deriving their just powers from the consent of the governed, –That whenever any Form of Government becomes destructive of these ends, it is the Right of the People to alter or to abolish it, and to institute new Government, laying its foundation on such principles and organizing its powers in such form, as to them shall seem most likely to effect their Safety and Happiness. Prudence, indeed, will dictate that Governments long established should not be changed for light and transient causes; and accordingly all experience hath shewn, that mankind are more disposed to suffer, while evils are sufferable, than to right themselves by abolishing the forms to which they are accustomed. But when a long train of abuses and usurpations, pursuing invariably the same Object evinces a design to reduce them under absolute Despotism, it is their right, it is their duty, to throw off such Government, and to provide new Guards for their future security.–Such has been the patient sufferance of these Colonies; and such is now the necessity which constrains them to alter their former Systems of Government. The history of the present King of Great Britain is a history of repeated injuries and usurpations, all having in direct object the establishment of an absolute Tyranny over these States. To prove this, let Facts be submitted to a candid world.- Thomas Jefferson 1776
Thomas Jefferson was talking about the  social contract theory of British philosopher John Locke.  This idea is based on Natural rights.  People are born with these rights and they can not be broken or taken away from people. Authority means legal power in a social contract.  In a Democracy the Government’s legal power comes from the people. What dose this mean? American government is a Federal Republic which means that all government officials are representatives of the citizen body as a whole.  The U.S government is held together in a balanced way  by a Constitution that begins with three words “We The People”  If the  government abuses these rights then the people have the right to change the government with laws, actions, petitions, voting and even protest.  The key to success when we disagree has been the ability to compromise.

What does SOCIAL CONTRACT mean?

The word SOCIAL  today implies the following of words or ideas:

When we think of Contract today the following list of words or ideas apply:

In my life how do I see the American Social Contract helping me?  What is my part of the contract and what kind of “life, liberty, and pursuit of happiness” is the result of honoring that contract?

The people in the society help me become the man that I am today because they help me in my education .  My family is my first classroom for life.  I also make agreements on how I will find things to help me finish classes. This will help me in the future to be able to do things on my own like business and be able to do taxes and pay for my own things.  The strength of individual citizens comes from their ability to own their education and their choices in life.  I am a member of “We the people” most fully when I can see how to meet my own personal responsibilities and accept the consequences of my actions.  Freedom is not free.