An African’s Response to Trump 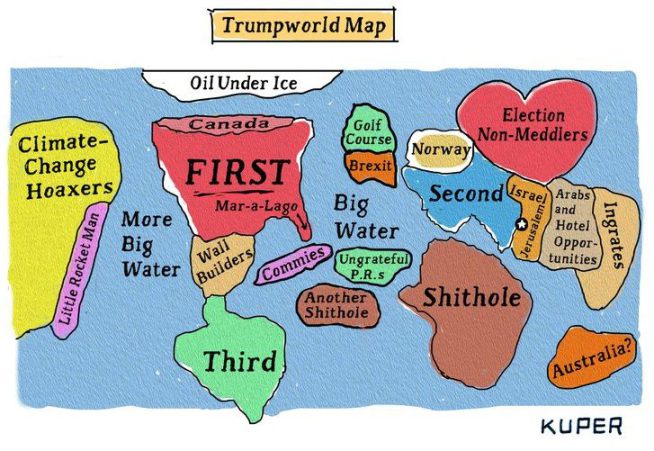 President Trump has a very selfish and uneducated view of the world.

President Trump sent a message to the world this month when he held a meeting about immigration policy with Democratic and Republican law makers.

The most honest and truthful response to the president saying that we African should go back and his latest speech saying shithole country, what I have to that insulting question of “why don’t we  go back to our shithole country’s where we came from” should be as follows for accuracy and truthful purposes. I will go back from where I was unwillingly brought from when the president returns to where he thinks he came from, and you will find out that his origins lead to those same shithole country’s, what these racist people don’t understand is that our ancestors were living in Africa as a strong and diverse people when the white people came to get power.   and started slavery they never wanted to come but they brutally force them but as for we other Africans we can go back to our various country’s but what about those African-American who don’t know about there origin, How can they go back to a place where 75% of them didn’t even know? This is the greatest deception to EVER take place on Earth. They have brown people from N & S America believing that they are not indigenous to the Americas.  I have come to these ideas on my own but also through conversations with my boss.

The poorest country in the Western Hemisphere is Haiti.  It was the first free black democratic republic after a slave revolt led by Toussaint L’ Overture won its freedom from the French.  Its poverty is an echo of the white man’s racism through slavery but its culture is very much it’s own.  In response to President Trump’s comments about Haiti and African countries, comedian Conan O’Brien has decided to visit Haiti.

Some of us don’t blame Donald Trump  for saying all those insulting words to all Africans because we blacks don’t have respect or regard each other.   For some of us we know where we came from and if anything happens we can go back but what about the African-American?  There is a divide between blacks in America.  The African American is American but the African immigrant of today or the Haitian immigrant of today are tied to the culture of their homeland.

I can agree with Trump cause We all need to get over ourselves and look at each other by the content of our character, everyday actions and behavior. There are racist white folks and black folks on both sides. We just need to look at ourselves, family, friends and neighbors and be a good example and citizen. It is better if we all work to improve ourselves and promote good will towards all men.

Here is what President Trump had to say after so many accused him of racism:

US ambassador to Panama resigns, saying he can no longer serve under Trump administration

‘This place is a shithole’ projection appears on Donald Trump’s D.C. hotel

Hurricane Matthew Update: The Time to Help Children in Haiti is Now