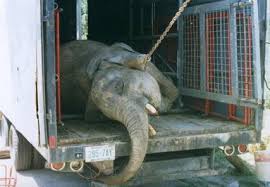 Imagine being  trapped inside a cage for days in which there is no temperature control, and the only reason to be taken out from a sadistic cage and boxcar is to be chained and be treated inhumanely and to be trained to please and entertain others. Living a daily inhumane routine of brutality, extreme discipline and psychological distress is what animals at circuses go through. Before you go to a circus this summer imagine what they go through.

Animals in circuses travel 11 months a year. Throughout that time they do not get enough exercise and are forced to give up their natural instincts. They have to adapt to a new surrounding when they are taken away from their natural habitat. Some animals, such as lions, are forced to get surgery to get their teeth and claws removed. Most animals are drugged in attempt to be more manageable.

Some of the things circus instructors use to train animals are whips, bull hooks and electric prods. Sometimes even physical punishment is a consequence animals must endure. There are laws against animal cruelty, but they are not respected or reported as often. Most animals never go back to where they come from and live in circuses until they die. 96% of their life is spent in circuses.

This year will be the last year ever for the Ringling Brothers circus to use elephants in their shows. After years of protest from animal rights organization, the elephants will finally be able to ‘retire’. There are others circuses that do not use elephants as part of their act but do use different animals and hopefully one day they will not take advantage of them.