Are You Prepared for LGBT+ ?

Joe  Maldonado is an 8-year-old transgender girl to boy. He was in the Boys Scouts of America until he was questionably removed from his New Jersey Cub Scout Troop. Joe’s family reports that parents of other children had been complaining about Joe being in the troop. Joe’s mother says the organization already knew her son was transgender when she signed him up. Now, the Boys Scouts of America is rejecting Joe. In a statement, the BSA said “No youth may be removed from any of our programs on the basis of his or her sexual orientation…. Gender identity isn’t related to sexual orientation”  They have also said that their programs are for those identified as male. 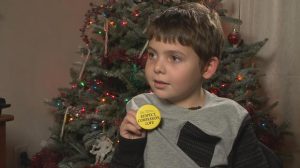 I think it’s so ridiculous to have Joe go through something so traumatizing. They had already accepted him into the program and then kicked him out due to peer pressure from the other parents. I hope one day everyone will learn to accept each other and not be so judgemental about everything.

The only solution to this is for awareness to spread about LGBT+ and educate parents about what it means to be a transgender. The world needs a little more love and so much less hate.