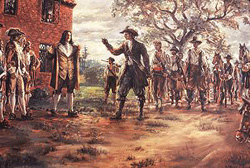 One hundred years before the Declaration of Independence from Britain was signed , in 1676, about a thousand Virginian colonists rose up against the governor, William Berkeley. The colonists thought that they were not being well-represented and did not have rights due to the disorganized political structure. Among them was indentured servant, Nathaniel Bacon, who was said to have led the rebellion. The initial cause that started the rebellion was Governor Berkeley not allowing people under the ruling class to trade or retaliate against series of Native American attacks.

The reason why this event is so important is because it was the very first noted rebellion that occurred in the colonies; followed by another in Maryland later that year. Bacon’s Rebellion supported the social caste system of the south because there were wealthy cavaliers living along the coast. When indentured servants were freed, they were forced to live in the back countryside with infertile land. I’d like to know how slaves were feeling at that point. This topic relates to American society over time during the Civil Rights movement; when a group of people are being mistreated and not represented.