Bernie Sanders a fan of Marijuana? 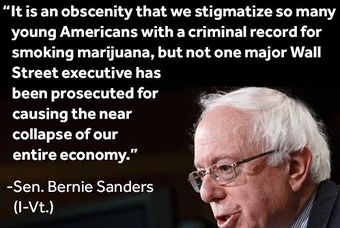 With the presidential debate ongoing for the November election in 2016, people are doing more and more research on each candidate. A favorite of many teenagers and young adults of the United States is Independent Senator Bernie Sanders of Vermont. Bernie has introduced an idea for a bill that could end the prohibition on marijuana. This bill could change the way the people of the United states act and the way that law enforcement runs. With the legalization of marijuana, I predict that crime rates, amount of drug addicts and arrests will go down drastically. The distribution process would go in a way much like cigarettes and alcohol. They would be purchasable at the store, taxed, easier and safer to get.

A recent poll shows that over half the country (58%) , is in favor of the legalization of marijuana. 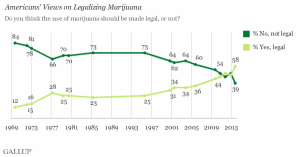 Bernie Sanders is just suggesting that we treat the drug just like we would Alcohol. In the article, Sanders states that marijuana has been proven to be less harmful to humans than alcohol. This bill is something that should have been introduced long ago.

I think that Mr. Sanders would be even more influential on this subject if he was elected president because the presidency is known as the chief citizen.  This public office is  and always has been influential.  With the power of the media today it is a social influence that has grown over time.

If you would like to help legalize the use of marijuana, you can go to the link below and take a poll. 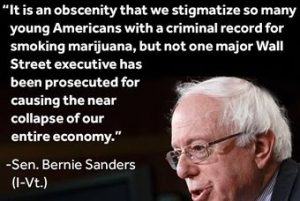