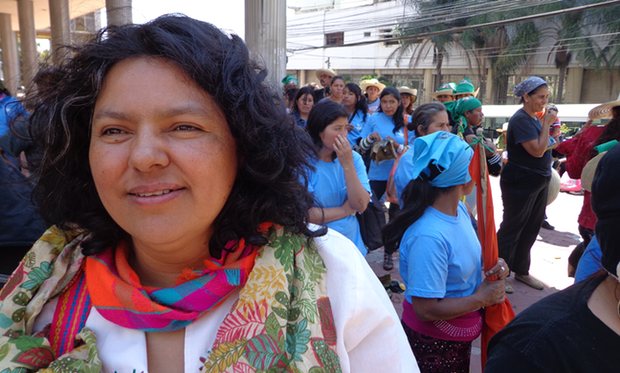 Honduras is a dangerous place! March third was the murder of a Human rights and environment activist, She was  murdered barely a week after she was threatened for opposing a hydroelectric project. The co-founder of the Council of Indigenous Peoples of Honduras (Copinh) was shot dead by gunmen who entered her home in La Esperanza, Intibuca Honduras at around 1am on Thursday march third. Some reports say there were two killers; others suggest 11. They escaped without being identified.

Police told local media the killings occurred during an attempted robbery, but the family said they had no doubt it was an assassination prompted by Cáceres’s high-profile campaigns against dams, illegal loggers and plantation owners. “I have no doubt that she has been killed because of her struggle and that soldiers and people from the dam are responsible, I am sure of that. I hold the government responsible,” her 84-year-old mother said on radio Globo at 6. Karen Spring, a friend of Cáceres’, said it was unclear how many assailants had participated in the attack, but that Cáceres was hit by at least four bullets.

Members of Copinh escorted the body as it left the house on the way to the morgue in the provincial capital. About a hundred of them also marched from the public prosecutor’s office to the police station, where they demanded an independent international investigation. Others headed to La Esperanza to take part in the wake.

Honduras as many other small countries is very dangerous because of the low economy but it is not the poor people only that are doing the bad things as we can see on this post. Berta Caseres was an international known woman because of her acts helping the low income people and preventing the government to overreach over the poor people trying to built new projects without letting the people know about it, they take their land, houses, and everything and just send people somewhere else. Berta Caseres was killed right after she opposed to a hydroelectric project, that makes people think and make their own conclusions.