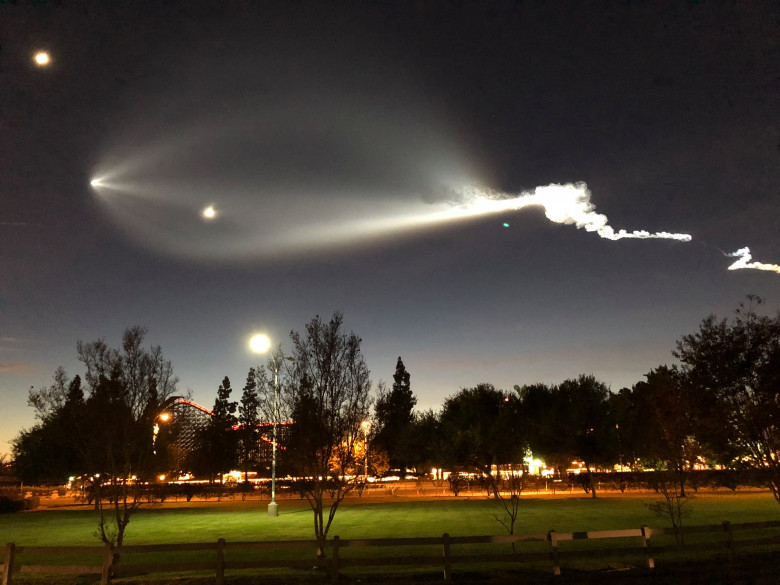 Did you see that extremely bright white cloud sprint and flare over Southern California just after sunset on Friday night?

It was a Falcon Space rocket launched at Vandenberg, an air force base in Lompoc, about 150 miles north of Los Angeles, around 5:27 p.m.

“The Falcon 9’s exhaust plume of liquid oxygen and kerosene was “illuminated at high altitude by the sun,” according to Vandenberg Air Force Base officials.”

Confused and scared, onlookers turned to social media to share images and fears of aliens, “weird objects,” and gaseous clouds. Some even thought they were nuclear missiles launched by North Korea.

The sight, which could be seen from as far away as San Diego, was so alarming and scary that police were called across Southern California.

“We got quite a few concerned calls with people saying there’s a light in the sky,” said Torrance police Sgt. Paul Kranke. “We didn’t know what it was but, fortunately, someone at work follows rocket launches and we were able to tell people what it was.”

The Riverside City Fire Department, after receiving several and several reports of something exploding in the sky above Victoria Avenue and Irving Street, dispatched fire engines and rescue units becoming something very alarming an dangerous. But dispatchers quickly recalled the units after learning about the launch. The Riverside County Sheriff’s Department also received many reports of an explosion. But again it was just the rocket. I believe its something cool that California was able to experience something phenomenal and amazing.