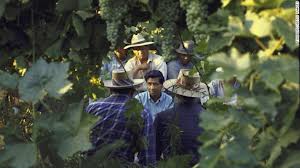 “A true American hero, Cesar was a civil rights, Latino, farm worker, and labor leader; a religious and spiritual figure; a community servant and social entrepreneur; a crusader for nonviolent social change; and an environmentalist and consumer advocate.”

During the 1960’s Latino Americans were increasing in numbers and were finding strength to fight for civil rights from the successes of African Americans.  Many Latinos were farm workers.  Farm workers did not have a union to protect workers’ rights.  Cesar Chavez was different in the way he fought because he used Mahatma Gandhi’s ideas of nonviolence.  He went on a hunger strike to make people aware of Latino farm workers rights. In 1966 he became one of the founding leaders of the United Farm Workers union.

Cesar Chavez was a hero for the farmers and for many people. He was like Martin Luther King Jr.  who was against discrimination against black people and all people of color. We all should remember Cesar Chavez as an icon of civil rights for Latino workers in American history.