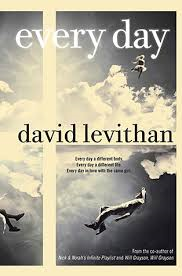 The book “Every day” by David Levithan is about a person name A that does not have a specific gender that goes from body to body every day. A does not have a gender it becomes whatever gender of the body it’s in. ‘A’ borrows each body for a day and no more than a day. ‘A’ never borrows the same body twice and never goes into a body older or younger than it. In the story ‘A’ falls in love with a girl name Rhiannon but he can’t be with her because it is constantly switching bodies. But ‘A’ wants to be with her so now the challenge for ‘A’ is finding a way to be with Rhiannon while still switching bodies every day.

The mysteries in this book is the mystery of Nathan and A. A borrowed Nathan’s body for a day and went to a party with Rhiannon but then A lost track of time and left Nathan’s body on the side of the road for the police to find. The next day when Nathan got his body back he didn’t know what or who had possessed him so he blames it on the devil. Nathan tries to find “A” to expose him. They communicate through emails and when they meet Nathan shows “A” to Rev. Pope who then confronts “A” calling “A” the devil.

The most uncomfortable body that “A” borrowed was the body of a fat person. “A” did not like this body at all and Rhiannon didn’t like it either. A felt uncomfortable in this body by the way it described it and the suggestions it made that the fat person should do. A also said some pretty mean things about that body and things it could have done to prevent from getting that big if that was its permanent body.

The most significant body that A was in would be the body of a blind person. To A that body was significant because of the disadvantages that was upon it. A had never been in a body with no eyes before it was very hard for A to move around in that body. Being in a blind person body also help you see the world from a different view well not actually seeing the world but being able to see it from a different perspective through your mind’s eyes and understand it from a blind man perspective. This was a very significant memory for A.

I don’t like the character Rev. Poole because in the story he is portrayed as a fake reverend. He acts like he wants to help save people but then when he meets with “A” he just slanders “A” around and made threats to “A” and I don’t like that. He doesn’t offer to help “A” or help Nathan instead he wants to help “A” stay in one body but I guess that’s what “A” want so in a way he did help “A”.

I think it was inappropriate and wrong but I also think “A” could not help himself he really like her. He was so in love with her that he couldn’t help not being around her or with her. All of this is emotions and feelings and sometime people don’t know how to control their emotions and feelings and most of the time because of that people act selfishly only thinking about themselves and not the other person. A was not thinking about how he was distracting Rhiannon from her life or from her relationship with Justin and quite frankly he didn’t care at all as long as he was with Rhiannon that’s all that mattered to him. This was because of his emotions and feelings that he had it was what made to think and act so selfishly not caring about Rhiannon’s interests at all only his own. This is perfectly normal in society but it is wrong but only a few people will figure out and understand why it is wrong while most people will only think about themselves and their emotions which lead to doing things that may only benefit themselves and not the other person.

This book did not inspire me at all but it is a great story and I enjoyed reading it. The story is good and different but it is not an inspiring story for me because of the type of guy I am. I love the story because it is a different idea I never would have thought about an idea like this story writing about someone waking up in a different body each day but then falling in love with someone it’s an interesting idea and this is what makes this book really good because of the love story that goes on in it.

I recommend this book to everyone to read and enjoy because it’s a great story and a great idea. I really enjoyed reading this book and at one point in time I was really excited and eager to read this book. As you read this book there will come a time where you won’t want to stop reading it just because you want to see what is going to happen next you will be eager to read the next chapter just to see what is next. This book really made me fall in love with reading again because I didn’t read over the summer I didn’t have that kind of time but reading this book it really has put back into my reading mode. I really wasn’t looking forward to enjoying this story like I did even though people told me it was good I tend not to listen to what people say call it hard headed or whatever you want. But when I read “Everyday” I really liked it David Levithan did a great job by even coming up with such a brilliant idea. The story was amazing the idea was brilliant some of the characters were spectacular and others were alright but overall it was a good book. If I would rate this book of a scale of 1-10 I would have to give it a rating of 7 or 7.3 anywhere in the seven zones just because I didn’t like the ending. I didn’t like how it ended but then again this is only my opinion I can’t speak for everyone I can only speak for myself. You can go ahead and check it out for yourself and I will be glad to hear what your opinions are about the book. I hope you enjoy it as much as I did good luck.