Chess Cliches With a Message 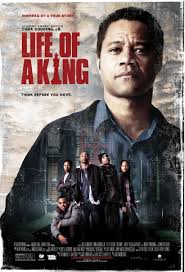 The movie Life of a King is based in downtown D.C. The movie follows Cuba Gooding Jr. an ex-con who has been released after an 18 year stint in prison. He gets a job as a janitorial staff member and is asked to sit in for a teacher who was supervising detention. He teaches the kids in detention about chess and life lessons. Gooding Jr. is fired since he lied on his application about him not being a felon. Eugene Brown (Cuba Gooding Jr.) after being fired opens up a chess club for all students. As students start filling in spots in the club he encourages his prodigies to compete in tournaments. The first tournament is a failure because Tahime forged his paperwork. The recurring message throughout the movie is to think before you move. In the end Tahime ends up losing to one the best chess players but comes in second and still receives a scholarship for college.

Life of a King is a movie full of messages about life and it’s endgame. The messages portrayed throughout the movie are paramount to the story that is being told. Envision the endgame and think before you move is something everyone should keep in mind when living their life. The movie does have value in the way that it advises us to be smart about what we are doing and to think about where you will end up. The third most prevalent message is that you have to put the king first, and the king would be yourself. The messages may be cliched and common sense but most people lack the train of thought that would prevent most situations from happening. Life of a King touches on social issues and the way people think.

In real life people in the slums, ghettos, and poverty stricken areas believe that money is the only way out. Most of these people end up dead or in jail. This movie shows how a life of gang activity, drugs, and risky activities will end. One of the three boys ends up getting shot and killed due to a drug deal going bad and another of the three boys ends up in jail. The situation of these three boys is quite prevalent throughout the world. The movie shows a different way of getting out of the “hood” through education and scholarships.  The movie Life of a King bursts through the wall like the Kool Aid Man pushing its messages onto its consumers plates in a delicate way.

Life of a King is Cliche City with a population of more than enough to sustain a town. There are literally cliches everywhere. Clifton is a cliché character, the type of character that does what he wants, doesn’t take valuable advice, and believes that his kingpin will help him when he gets in trouble. We have the bad kid goes good cliche with Tahime. Then we have the generic follower Peanut, who follows everyone around, does what everyone says, and ends up dead. Eugene Brown is the biggest cliché of the entire movie. Mr. Brown plays the role of a mentor trying to help at risk teenagers; who hasn’t seen this before. Then finally the second biggest cliché is how at the end of the movie the kid that turned good gets rewarded and learns a valuable lesson. We have all seen these characteristics in movies before.

An issue with this movie is the actors. The actors are great but their lines are a bit forced. With Gooding Jr. playing Eugene Brown, I felt like some of his lines were as forced as Tommy Wiseau in The Room. In fact, most of the lines in this movie seem pretty forced except for the emotional parts. The storyline is halfway decent but I ended up losing interest halfway through. Watching Life of a King seemed like a chore in some parts but picks up in another scene. Viewers will know the ending of the movie far before the movie starts and the movie is pretty much very predictable to the point where you’d be considered a psychic.

Life of a King is a halfway decent, cliched story with a overused but very important message. The movie had good actors, but some of their lines were forced and I’d say that is due to the scriptwriters. The movie’s premise is very common and once again holds a very important message within. Life of a King hammers home a message with delicacy and real life application. Overall the movie is predictable, cliched, but holds an essential message.