Church and State on Common Ground? 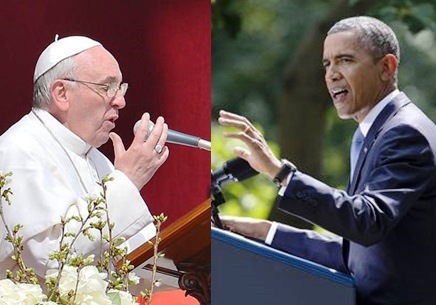 You are either with us or against us!

Many Americans look at their fellow citizens and feel a great divide on a number of issues from healthcare policy to gun rights.  When it comes to Church values and secular values in America there is often disagreement.  If you asked the average American if the President of the United States agrees with the leader of the Roman Catholic Church on anything, how many people would quickly say “yes”?  How many would say “no”?

It depends on the issue.

When it comes to church and state issues pressing in the new healthcare policies, the President certainly has not won over any religious constituents who oppose “mandated” funding for abortion.

However on the economy, they agree.  On Wednesday December 4th President Obama spoke out praising what he described as Pope Francis’ “eloquent” words on closing the income gap.  Both the Pope and the President have a “populist” style of leadership.

Just as the commandment ‘Thou shalt not kill’ sets a clear limit in order to safeguard the value of human life, today we also have to say ‘thou shalt not’ to an economy of exclusion and inequality,” the pope wrote. “Such an economy kills.” President Obama questioned “How can it be that it’s not a news item when an elderly homeless person dies of exposure, but it is news when the stock market loses two points. But this increasing inequality is most pronounced in our country. And it challenges the very essence of who we are as a people.”

In a world that is simultaneously so connected by the ability to express ourselves and so divided in social values, it is vital to find the common ground where it is least expected.

Pope Francis Issues a New ‘Thou Shalt Not’

Obama, in speech, to focus on income disparities