Cold War and How it Affects Us Today 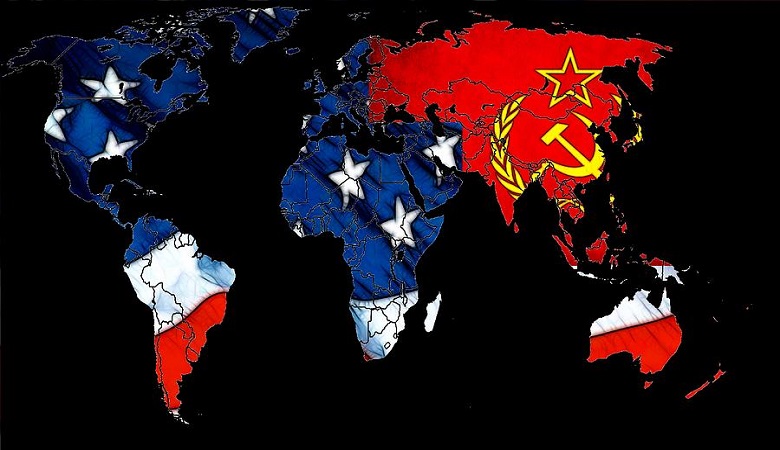 The cold war (non- violent war) started due to the tensions between USSR and its satellite states and the US and its allies. The soviet dictator Joseph Stalin feared the US and the capitalist west, while the US was fearful of the communist rule in the soviet union. As tensions rose an arms race began between the West and USSR to accelerate nuclear weapon production. As both militaries gained more and more power through their armies and weapons, the focus became to deter each other from starting nuclear war. Because each side had enough nuclear weapons to destroy each other they both knew setting off one bomb would mean destruction of both countries. M.A.D. , the acronym for Mutually Assured Destruction was created because of that. The relationship between the two nations was a fight for political control. Both countries wanted political control over the world and that caused a dangerous battle of whose army and weapons were better.

The cold war ended with the tearing down of the Berlin wall and the Iron curtain being lifted. With bombers being on 24 hour alert since 1957, it was a historical day when bombers were taken off alert and disarmed on September 28, 1991. My dad remembers this day because he was on duty at Minot Air Force base this day. His job was to control entry to the Alert facilities where the bombers were located and that morning they got the call to take them off alert. These launch control sites held upwards of 450 missiles in ground plus the bomber planes armed with nukes. Just this Air Force base alone had enough nuclear missiles to destroy the world more than 3 times.  Although the cold war ended and the Soviet Union dissolved and the new Russian President banned all communist parties, communism was still prevalent in many countries including china, Vietnam and Korea. 2 of the 3 countries we went to war with during the cold war and resulted in a loss and a stalemate. With hope for a better more open global economy the cold war ended but the politics of oil in the Middle East showed the effects of Cold War chess playing. The Proxy war between Iran and Iraq created Saddam Hussein and his grab for oil in Kuwait in 1990-1991. The Cold War fueled wars all over the middle east. The fear of super powers not having control over the region and them getting access to nuclear weapons caused tensions between the US and middle east. During the 80s the US supported Taliban led insurgent groups against the Soviet Union, later that would come back to haunt us as the same people we supported started attacking us. In that sense the cold war lead to our decade long battle against insurgent forces in the middle east.

Today, terrorism is still a an issue that the US faces everyday. The CIA and FBI spend lots of time and money battling terrorism, but not on the battlefield we are slowly transitioning from real life combat to cyber wars. Our password protected world is mostly due to worry from the cold war. The obsession with security and protection stems from the anxiety the cold war brought us. The cold war taught us that constant surveillance and tracking is an effective method of warfare and preventing attacks. Sadly, all of this tracking and surveillance follows us as everyday citizens. These technological innovations have made everyday life easier for us as citizens and our military. Our military can use drones to take out possible threats and keep our borders secure. The new technology we are using for warfare is great… Until it gets in the wrong hands. Now we have to develop radars to counter enemy drones and get experts in to secure our online servers. The cold war taught us no matter how advanced we are, we will always have the same power used against us. We have so much access to the internet and through all of our mobile devices we are constantly monitored and being put into multiple databases. Unfortunately it invades our privacy but it has proven to be an effective way to counter terrorism and carefully monitor other countries and potential threats. These security measures shows how 50 years of cold war fueled many innovations in technology and ultimately pushed the human race to innovate and change the way we do things forever.

For more information on the Cold War: