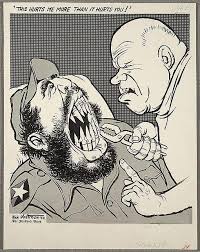 The Soviet Union placed nuclear missiles in Cuba during the early 1960s. This was a high point of tension during the Cold War.

“This is gonna hurt me more than it hurts you”

This cartoon shows the Russians putting nuclear bombs into Fidel Castro’s teeth, like a dentist working in someone’s mouth, The Russians wanted to install nuclear warheads in Cuba. Once JFK found out about this, he put up a blockade and told the Russians that if they crossed the line then we would take it as a sign of aggression. We would then bomb them into the stone age. I personally find this funny because it just looks amusing. I also feel that when people saw it during the Cold War times, they would not have appreciated it, pushing JFK towards the possible “WWIII”.

This cartoon shows Castro towering over a person who is in rags and is chained up. 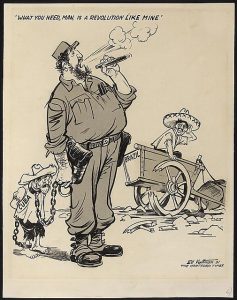 Castro is talking to a man from Brazil telling him that he needs to have a revolution in Brazil like the one in Cuba. During this time, Brazil was facing some economic hardships and had recently had a new president take the leadership. I feel like the cartoon is accurate for what was happening in the Communist Cuba. The man is chained up and is nothing but rags.  I fall under the assumption that all citizens in Communist countries are faced to live like this. 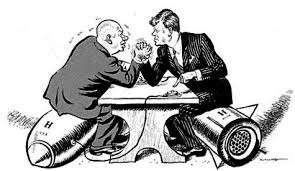 The cartoon shows President JFK and Nikita Khrushchev; the leaders of two superpowers (USA and Russia) arm wrestling with a twist, they are sitting on Nuclear Bombs, and their fingers are over the trigger. Russia threatened to place Nuclear weapons in Cuba, and America was very afraid because we are very close to Cuba. America made a line and told Russia that if they cross it, then we will bomb them. This cartoon shows just how close we could have actually been to a war not so cold. We were only a push of a button away from blowing the entire planet into a smoldering mass of magma. The picture should scare everybody a little bit it just goes to show that we could explode into nothingness in matter of seconds.  This type of power politics of calling each other’s bluff in the Cold war was known as “detente”. 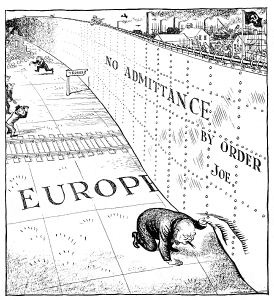 This cartoon shows Winston Churchill lifting a curtain rivets which refers to The Iron Curtain. Its message means that Churchill wanted to avoid a nuclear war and ease tensions between the Western powers and the Soviet Union.  Chruchill was the leader of England at the end of World War II and he was very disappointed that the communist Russians had taken over many countries in Eastern Europe.

This cartoon shows the Mistrust between America and Russia, that big edge in the middle of them also shows how irresponsible statements and deepening suspicious they had towards each other, in others words there 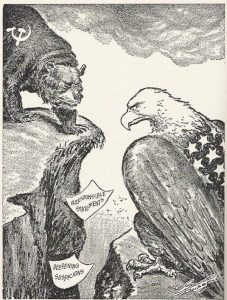 was no trust at all, the Soviet Union (The bear) is staring at America (The eagle) because of these things.  This could represent the Cold War in the 1950s and 1960s.  The reason the Cold War was able to end in the late 1980s was because of the trust that built up between President Ronald Reagan and Soviet leader Mikhail Gorbachev.