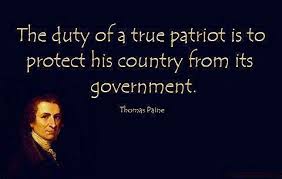 Thomas Paine began writing Common Sense in late 1775. It was called “Plain Truth” until a man named Benjamin Rush helped him edit and publish it and suggested changing the title to Common sense.  The essay was published on January 10, 1776 at the beginning of the American Revolution. It challenged the authority of the British government and the royal monarch King George . Common sense was the reason why American colonists were arguing over freedom. It sold about 500,000 copies in the first year and was very popular and praised by many others.

Common sense was written in a simple way so Paine’s political ideas were available to a common audience. He managed to remain anonymous even when Robert Bell put him in a newspaper. Thomas Paine publicly gave all colonial printers the legal right to issue their own copies.

In order to protect your country from its government you need ways to limit your government. We need people to vote, we need the  checks and balances of three separate branches of government, and and we need diplomacy. These are some of the best ways to protect the United States and the American people. We use diplomacy with other nations of the world to deal with a number of challenges that cross national boundaries and affect us here in the United States.

Do you think Thomas Paine’s Common sense would help us today the same way it helped in the 1700’s?

It is a different world today so I don’t think it would help the same way it helped back then. I do think that his ideas of the need for  limited government are still true today but how we apply those ideas is different.