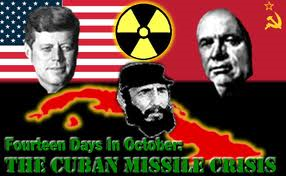 The Cuban missile crisis of October 1962, was when US President John F. Kennedy faced off with the Soviet’s leader Nikita Khrushchev over nuclear weapons found in our back yard right near the US shore in Cuba.  After a communist revolution in the late 1950s Cuba became a small communist country in 1959.  In that same year the US asked Turkey’s leaders for permission to install an American military placement of nuclear missiles pointing towards Russia for emergency purposes.

The US military wanted to invade Cuba and overthrow their government but John F.  Kennedy realized this would be the worst possible outcome, and would lead to a nuclear war. He decided to come up with a plan and on October 22, 1962.  He publicly announced the naval blockade; blocking Russian ships from going into Cuba.  The Soviet leader Nikita Krushchev reacted to this and announced that this will eventually lead to war. Eventually the Soviet leader told John F. Kennedy he should leave Cuba alone and the Soviets would take their missiles back home,.  John F Kennedy agreed to leave Cuba alone and secretly also agreed to remove America’s nuclear weapons from Turkey. This was the closest US came to a nuclear all out war. 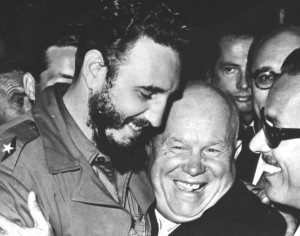 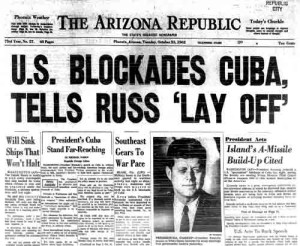 What a close call for America!

Good thing US spy planes spotted this missiles in Cuba which of course gave them time to identify the threat and react to it. I wonder what would’ve happen if America invaded Cuba. I wonder if that would’ve really started a nuclear war.