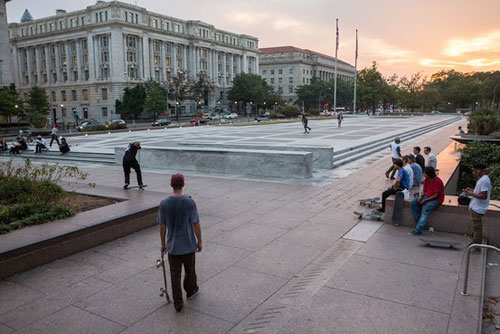 “Palace to Palaski” is basically a point A to point B type of thing. All skaters gather at a skate shop in D.C. called Palace 5IVE and then ride their skateboards in the middle of the street, sidewalk, wherever they feel like (even if they are disturbing traffic) to ride to Palaski Park, also known as Freedom Plaza. This is only one of the biggest events for skaters in D.C.. but it is much more than just skateboarding down the street to a destination. This is a holiday meant for fellow skateboarders to get together spread positive energy, creativity, and make new friends to skate with. Skaters are not the type of people to judge you in anyway shape or form; everyone gets along well and makes connections each other in the snap of a finger. All of the people I have run into in D.C. that are skateboarders are all chill with each other. There is never any hostility towards one another. It is like skaters are all one big family who never hate on each other.

Not only is it in D.C where the skateboarding culture is flowing, but also anywhere in northern Virginia. There are plenty of places to skate and connect with other fellow skateboarders all around NOVA. Such as places like skate parks, street spots, or maybe even a local drained pool to skate are all places where you will meet really cool, polite people to make friends with and hangout with again. Some local skate parks near you:

This is Wakefield Skate park (Audrey Moore Rec Center). This is one of my favorite skate parks that is in the area and I go here mostly everyday. I’ve had some of the best memories here, landing a new trick, landing a trick that I have been trying over and over again, and I have also met some of my best friends from here. The people there are very friendly, a good place to learn how to skate, and this park has many different ramps, rails, and just a big variety of different things to skate. My favorite thing to skate is the quarter pipes in the back section of the park, its two about 9 feet ramps that include a snake run (A ramp that looks like a snake) in between them. This skate park is never ending amounts of fun.

This is Manassas Skate park which is another local skate park that is one of my favorites. The address to the park is 9503 Dean Park Ln, Manassas, VA 20110. This skate park is especially good for people that want to learn how to skate because this park is really small with a lot of small obstacles and ramps. The people here are very friendly and majority are kids learning how to skateboard. Like I said, this is a perfect skate park for learning considering there is very small boxes that you can learn how to ollie onto and small quarter pipes where you can learn how to do your first drop in.

There are even more skate parks other than the two I’ve mentioned. You could go to Lake Fairfax Skate Park out in Reston, make your way to Van Dyke Skate Park in Fairfax near GMU, or maybe you could go to Alexandria and skate Duke Street Skate Park. The skateboarding culture is enriched with a lot of new fun experiences such as meeting new people, going to places you’ve never seen before, and learning a hobby you could find out that you actually love to do! Pick up a skateboard and go to one of the local parks I’ve shown you or maybe even go down to D.C.’s Freedom Plaza and look at the tons of skaters doing tricks and having fun.