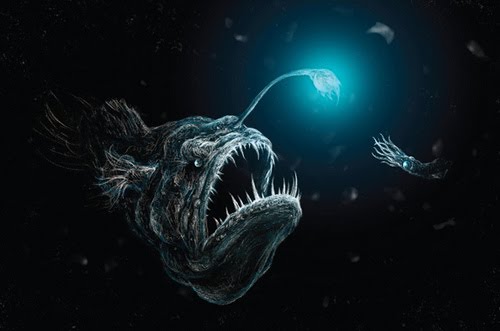 Over the past century humans have been able to accomplish astounding milestones, from the Wright brothers who conducted and flying the first successful powered airplane in 1903, to American astronauts Neil Armstrong and Edwin “Buzz” Aldrin who became the first humans to land on the moon.  We’ve visited all the remote islands, conquered the Arctic, and penetrated the deepest jungle, but little is known about the ocean. What we know about the marine life in the ocean is as small as a snowflake on top of a mountain. 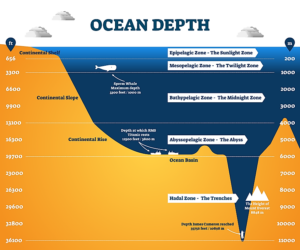 Over 70% of the earth is covered by ocean, and yet the deep-sea habitat is largely unexplored. According to the National Ocean Service, a shockingly small percentage, just 5 percent of Earth’s oceans have been explored and charted, especially the ocean below the surface. The ocean is divided into six layers starting with the top Epipelagic zone, followed by Mesopelagic zone, bathypelagic zone, Abyssopelagic zone and the deepest Hadalpelagic zone.

Surprisingly out of 5 zones this is the only zone that receives sufficient sunlight to perform photosynthesis. Light can penetrate the surface up to 200m. Marine plants convert sunlight and carbon dioxide gas into oxygen and food. There you can also find Phytoplankton, a single celled algae and bacteria that make up the foundation of the oceans ecosystem. Due to the abundance of food, 90 percent of marine life from enormous Blue whales to tiny jellyfish lives and thrive in this zone.

In 2007 Herbert Nitsch set a new record by diving to a depth of 214 meters, earning him the title of “The Deepest Man on Earth”. As we passed 214 meter light slowly fades away. In this region there is very little or no presence of sunlight. Without sunlight to make food marine plants can’t survive, which alternatively makes it very difficult for other marine animals to find food. As a result they have to rely on an unlikely source called marine snows. White flaky substance that constantly sinks from the surface to the bottom. It consists of dead plants and animals, fecal matter, shells and sand dust. Temperature here varies from over 20 °C (68 °F) at the upper layers to around 4 °C (39 °F) at the boundary with the bathypelagic zone. Fish such as vampire squid, shrimp, snipe eels, jellyfish, and zooplankton make their home here. Let’s deep deeper towards continental slope.

As we dive past 1000m, we enter the Midnight zone, deeper than the tallest structure built by humans, Burj Khalifa stands at 828m. Midnight zone is located in continental slope which is full of utter and endless darkness, where it is more difficult to swim than take a walk in space. Finding food here seems impossible, so marine animals have to preserve and use their energy efficiently. Some fish like vampire fish have long and deadly jaws, so they can grip their prey strongly, while others like angler fish use light( created by bioluminescence chemicals) to attract prey. All this creativity to land prey in their mouth, If they miss their catch they might never find it again.

On 4000m we enter the Abyssal plain, where the grave of Titanic is located. Here every single bit of energy is preserved, marine fishes stay motionless. The only time they use their energy is to escape from predators. The Abyssal plain is covered in grey mud and rocks dusted with the remains of marine snow, which is consumed by animals like sea cucumber, sea worms and sea urchins. This region is also a home to two giant creatures, Sperm whales and Giant Squid. Sperm Whale hunt and attack Giant Squid that are the size of a house.

At 8000 meters, we enter the deepest part of the ocean, where we can find long narrow trenches that make 0.25% of the ocean. Finding marine species here are rare, and only extremophiles exist down here, such as the Hadal Snailfish (Pseudoliparis swirei).  Hadal Snailfish holds the record for the deepest living fish around 8000m. The pressure here is so high that it is like balancing 1800 elephants on top of you. This species is able to accomplish this record, as its tissues are concentrated with a complex substance called Trimethylamine n-oxide(TAMO) which helps stabilize proteins in their body. Beside the snailfish you can also find plastic bags. Even the deepest part of the ocean is not safe from human pollution. Plastic bags were found by scientists in 2018 at the Mariana Trench.

It is important to explore the world and unlock the treasures within it. We must protect our natural resources and think about what we as a society and nations can do to protect nature and preserve it for our future generations. Global citizens are encouraged by the United Nations to do what they can to protect our people and our planet. For more information on how we can protect our Global Oceans 14-life-below-water

Here are the sources used to create this document.