Recent discussions of taking down confederate monuments have come up within the government. 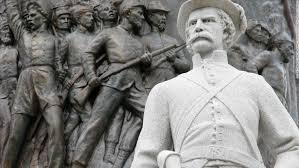 Aside from Hurricane Harvey, one of the most talked about issues in the media right now is the idea of tearing down confederate monuments because of their direct relation to slavery and ideals that many people do not want to convey. 150 years after the civil war and the abolition of slavery, there are still many plaques, statues, and even museums that memorialize and glorify the divisive events of our past.

The sensitivity of these racial divisions arose shortly after nine African-Americans were killed simply to, “start a race war”(Dylan Roof, 2015). It seems as though a race war did come about because the controversy that surrounds these confederate monuments has driven a wedge between Americans, and has only been intensified by the recent Charlottesville riots. On one hand, many people feel that the monuments that depict confederate leaders, slave workers, and the confederate flag, represent a portion of our past that was filled with hate and defied the basic principles of our constitution. They feel that keeping such artifacts alive represents that we, as Americans, still respect those theories and values of the past. On the other hand, some citizens feel that the monuments represent a portion of our history and heritage and should remain because America should appreciate where we came from because it shapes who we are.

Among the citizens who feel this way is the president of the United States of America. This is made very clear as he says in a recent speech, “I wonder, is it George Washington next week?” In this quote we see that President Trump thinks that the arguments made about tearing down monuments is disrespectful and foolish. He drives the point that removing confederate monuments is the same as eliminating the thought and legacy of our first president. Some of the monuments in question of being taken down include, John Hunt Morgan in Kentucky, The Memoria In Aeterna statue in Tampa, and Robert E. Lee in Virginia.

The morals and values behind this controversy paint a good picture of what America is going through right now. Arguments like these pop up both in society and government all the time. They constantly divide America’s citizens and enhance racial tensions. Many of the people who support the tearing down of the monuments are African American or liberal whites and those who support leaving them up are mainly conservative whites and white supremacists. Because of this, a basic issue has turned into an all out racial war against one another; inspiring riots, fights, racial slurs, and public disrespect. People who support the monuments use the constitution as means of keeping them up, but what they don’t realize is that all of this hate that is being directed at fellow citizens is more of a violation against the constitution than removing a monument is.

I see the point of view of the people who say that the monuments are a part of our history, however I think that they should not be portrayed in the light that they currently are. I think monuments such as those should be placed in museums or similar places so that they are seen as things that are apart of our past. In a museum, they have plaques that show how we have evolved from what we once were, they show that it is history, not the present. In this kind of setting, we are still representing our past by having the monuments around but they will not be glorified as though they represent a good thing.

Social divisions in a democratic society require compromise, however where does America draw the line on what we should and shouldn’t compromise on. Racism is something that shouldn’t be a compromise in our society. For more on this topic, as well as other topics of racial compromise visit:https://www.procon.org/