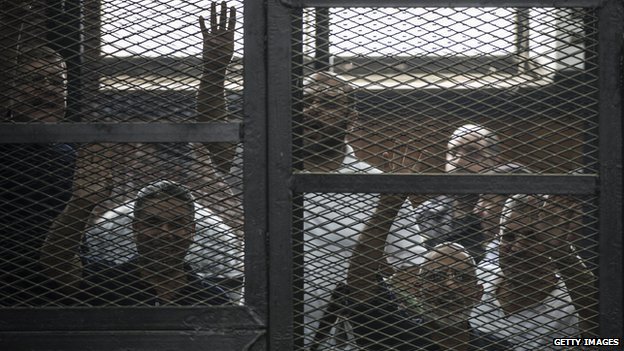 Egypt upheld a series of death sentences on 183 Muslim Brotherhood supporters  over an attack from 2013 to a police station near Cairo. All the men were convicted over the death of 11 officers in Kerdasa. The attack happened after Egyptian military forces cracked down on Islamist supporters of ousted president Mohammed Morsi on July of 2013. A Humans rights International group says capital punishment is unfair and that Egypt does not consider any national or international law.

Mr. Morsi could face a new case of espionage along with other three trials and if found guilty, he too could face a capital punishment. Also more than 140 defendants of  the 180 are already in custody and the rest have been sentenced in absentia.  In the United States we may have the death penalty but we also have procedural justice; this would never happen.

Last moth 37 cases were overturned on appeals. The original trial also shows that 377 were convicted in absentia to life in jail.

“Death sentences are another example of the bias in the Egyptian criminal justice system,” Amnesty’s Deputy Middle East, and North Africa Program Director, Hassiba Hadj Sahraoui, said in a statement in response to Monday’s verdict.

“These verdicts and sentences must be quashed and all of those convicted should be given a trial that meets international standards of fairness and excludes the death penalty.”

Mr. Sahraoui said that it is unfair to impose capital punishment in a unfair trial. The UN called the mass trials unprecedented.

Hundreds of people, mostly Islamists have been killed since the army deposed Mr. Morsi

In my opinion the UN should interfere as it is clear that the Egyptian country under military control is not only unstable but its also committing genocide against Islamists. 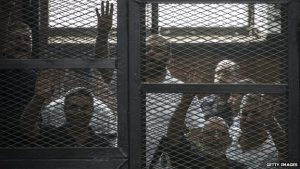