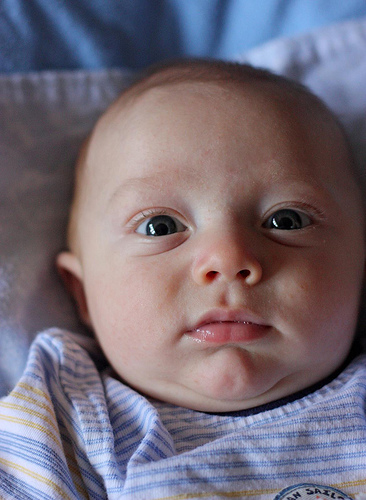 The scariest thing in the world to me isn’t being in a plane crash, coming face-to-face with a bear while camping, or even dying. Scientists always dream of changing the world, but what they don’t realize is how quickly a dream can turn into a nightmare.  I say this because the science of genetic modification is a terrifying reality. It opens doors to worlds never meant to be opened. Imagine walking into the grocery store and seeing not only strawberries, but blue and green strawberries in the produce section right next to the orange bananas. Now, multicolored food might not be scary, but the same concept applied to humans and pets is more than frightening. Green and blue dogs walking around a house sounds kind of like a trippy Dr. Seuss book, but this science-fiction is speeding into the world of non-fiction as scientists perform experiments on primates humorously named by the media “Designer Babies”.

The idea of designer babies was introduced when scientists conducted experiments they called “three-parent IVF.” During the process, a flawed mitochondria, the ATP (Adenosine Triphosphate) factory of a cell, is removed from the mothers’
egg and replaced with a healthier mitochondria from a different woman. After the egg is fertilized by the father, the procedure can continue like any other IVF operation, by implanting the fertilized egg into the mother. Scientists
think that this process could help stop the inheritance of certain birth defects such as epilepsy and blindness.

Executive director of The Center for Genetics and Society Richard Hayes said, “We support the use of that to allow couples at risk to have healthy children. But for non-medical, cosmetic purposes, we believe this would undermine humanity and create a techno-eugenic rat race.” What Hayes is saying, in more simple terms, is that this technology could be used to commercialize or industrialize children as a commodity, in a looser sense of the word. If this does become a socially acceptable science, questions such as “How tall do I want my child to be?” or “What hair or eye color do I want my child to have?” are raised.  Those, of course, are milder questions and can underestimate the true potential of this technology.

Science has and always will have a dark side, and genetic modification is entering the dark side of science at a rate which is irreversible. Children are born with the genes and DNA they inherited from their parents. Traits such as hair and eye color, height, weight, dimples, and double joints are all passed down from generation to generation. But this science is taking the idea of genetic inheritance and throwing it out the window, allowing for parents to choose what type of build, how many fingers or toes, what skin color, and even what they want their kids to sound like. It’s much like a Build-a-Baby Workshop you might see in the mall sometime in the distant future. Where is the sense of naturalism in genetic sciences? Children grow up with the idea that they were born this way by random chance and accepting who you are is a major part of self-esteem for them, in contrast to what this genetic engineering is displaying: That their parents are responsible for 100% of who they are and now they have someone to blame if the child does not like himself.

This “three-parent IVF” in theory sounds like a huge leap for science and the advancement of technology and disease prevention. I support this only to the extent that it is used for preventing birth defects and inherited diseases such
as HIV, cancers, diabetes, blindness, allergies, etc. It is a very new technology that needs to be studied for years or maybe even decades before it becomes known whether or  not it is safe for public use.