Documenting the Rise in Hate 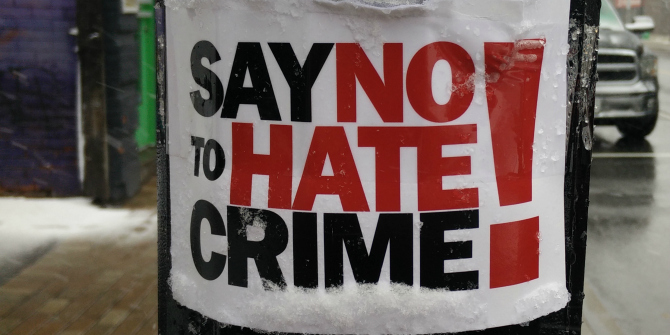 Since the start of 2019, there have been no less than five killings in places across the United States. In one incident, Arthur Martunovich allegedly walked into a Chinese restaurant in New York City in January and killed three men with a hammer. Police said he later explained his motive: “Chinese men are awful.” On Feb. 23, José Muñoz, 25, was shot and killed in the lobby of an Olive Garden in Louisville, Kentucky. The suspect in the killing alleged racial slurs. There are many more acts where the motive was just towards racism. Hate crimes are defined as “crimes that manifest evidence of prejudice based on race, gender or gender identity, religion, disability, sexual orientation, or ethnicity,” according to the Hate Crime Statistics Act passed by Congress in 1990. Hate crimes can be committed against people, property or society, and can include violent attacks, robbery, as well as arson and vandalism.

The definition of “hate crimes” varies by state, as do punishments, and even the federal standard has shifted over time. The ADL notes that 16,149 law enforcement agencies participated in the FBI’s 2017 crime data collection effort, but only 2,040 of these agencies, about 13 percent, reported one or more hate crimes to the FBI. That means that over 87 percent of crimes go unreported to the FBI, contradicting their current statistics for the rise of hate crimes. The problem with this is that when we don’t know how many hate crimes go unreported, it makes it even harder to address the problem. There must be more crimes reported to the FBI because the FBI only records data that they receive.

There are some solutions to these problems that can be set in place to overcome these disturbing rises in hate crime. After the synagogue shooting in Pittsburgh, the Department of Justice announced an $840,000 plan to study the collection of hate crime data. This data explains the increase and decrease of these hateful acts throughout years, one of the main ideas of these crimes is the person who acts on them seem to have troubled backgrounds that should be noticed by the people around them the most. Families continue to suffer from acts that can be prevented by the person who commits them. There needs to be a bigger crack on hate crimes because they have been going on for so long. This is not a community crisis, it is a national crisis.