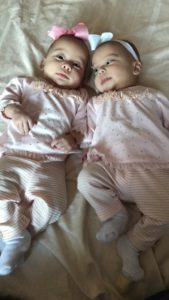 The happiness and difficulties of be a twin mom, yes a TWIN mom!

In March 2016 I found out that I was pregnant, it was just 5 weeks. I decided to come to the doctor for my first check and everything looked good but it was so early to see something so my doctor made me a new appointment. After four weeks I came back and it was the day that I was supposed to see my baby for the first time and listen to the heart beat. Everything was looking good.

The baby was healthy and looking good and suddenly my OB doctor says “it’s two heart beats”.  I was panicked and I asked her what are you saying? She looked at me and tell me “you are expecting TWINS, there’s  two heart beats” I started crying because when I found out that I was pregnant I told my best friend.  When I heard and said the words that I will have twins and it became very real.

A pregnancy with more than one baby is considered a risk pregnancy.
“Twins can be either monozygotic (“identical”), meaning that they develop from one zygote, which splits and forms two embryos, or dizygotic(“fraternal”), meaning that they develop from two different eggs. In fraternal twins, each twin is fertilized by its own sperm cell.”
I became a new mom of twins when I was 17.  It wasn’t easy in the pregnancy. I had to spend three months in bed-rest to keep my pregnancy.  My two little miracles were born in October, 2016.  They are preemies; born when they were 34 weeks. I waited one week to carry one of them because she was small and she was connected with some stuff to help her eat and grow. One passed all health tests and the first twin came home with me. I was happy but sad at the same time, because I had to leave the other one at the hospital alone. I came every single day to see my baby at the hospital and I always cried when it was time to go home. 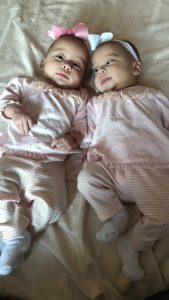 Becoming a mom and making the decision to continue to study was hard because my babies were just 5 weeks old when I decided to come back to school and leave them at daycare. Many people ask me if it is easy or difficult to have two little ones at the same time and my answer is “It is not easy but I know It will be worth it.” Nothing is compared to  the feeling of coming back after school and to pick them up at daycare and spend some time with them.

Just to see their smile changes my day.

Here are some resources that may be helpful if you or someone you know is faced with the challenges of becoming a parent at a young age.