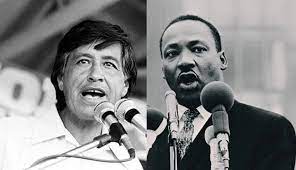 Dr. King was born in 1929 in Atlanta, Georgia. He was very smart and skipped two grades in high school. His father was a preacher in the church and he inspired Martin to get a doctor’s degree in theology (religion), from Boston University.
Working as a Civil Rights Leader

Civil Rights are equal social opportunities and protection under the law, regardless of race, religion, etc. Examples are the rights to vote, to a fair trial, to a public education.
Since he was African American, Martin could not go to the same schools as white children. Black Americans also had to use separate restrooms, restaurants, theaters, and swimming pools in some states.
Dr. King thought this was wrong. He was a Christian minister who worked hard for equal rights for Black people. He helped lead peaceful protests to change those unfair laws.
It was a hard fight. Dr. King was attacked and arrested many times. But more and more Americans grew to understand that it was wrong to treat Black people differently from White people.
In 1963, Dr. King led a quarter million people in a march to Washington, D.C. While there, Dr. King gave his famous “I Have a Dream” speech. He spoke about his hopes for America. He said people should be judged by their hearts, not by their skin color. His efforts helped bring about new laws to create equal rights for all Americans.

Who was Cesar Chavez?
Cesar Chavez was born in 1927 in Arizona. He started the United Farm Workers group. Chavez led marches and protests to get better conditions for farm workers. He died in 1993. Lawmaker Robert Kennedy called Chavez an American hero.
Working In The Fields As A Child
Cesar Chavez was born in 1927 in Arizona. At age 11, his family lost their farm during the Great Depression. They became traveling farmworkers. Chavez and his family moved across California working in the fields. His life was not easy.
Chavez finished his education after the eighth grade and worked in the field full time to help support his family. Chavez joined the U.S. Navy in 1946. He returned from the service in 1948 and married Helen Fabela. Together they settled in San Jose, California, and had eight children.
Making Life Better For Farmworkers
At the age of 35, Chavez had his first regular job. He worked with a group fighting for fair treatment. He helped people sign up to vote and battled against discrimination.
But Chavez’s dream was to help farmworkers. He had been poor. He understood how having no money had hurt farmworkers for many years.
In 1962, he started the National Farm Workers Association. The group later became the United Farm Workers of America (UFW).  Chavez traveled to farm towns, asking workers to join his group. Many people were afraid to join.
Getting Support For His Mission
Chavez wanted to build a strong union. A union is a group of workers from a single trade. Together, they bargain for things like better pay and work hours. Chavez hoped his union would give power to poor farmworkers.
Chavez learned from leaders like Mahatma Gandhi and Dr. Martin Luther King Jr. He adopted their peaceful way of fighting. He made farmworkers promise never to hurt other people.
To win fights, Chavez used marches and protests. Many Americans supported him. They refused to buy grapes and other foods until the growers listened to the workers. This helped the workers win better pay and work hours.
Chavez’s Top Achievements
The UFW won huge victories for farmworkers. It was the first successful farmworkers union in American history.
The group helped farmworkers win new rights. It gave them better lives. Thanks to Chavez, they had more breaks at work. The fields had clean drinking water.
Death And Legacy
Chavez died in his sleep in 1993. More than 50,000 people went to his funeral.
Chavez liked to say “Si se puede!” This means “Yes, it can be done!” in Spanish. He inspired many people. His birthday is now a holiday in 10 states. Chavez helped regular people do amazing things. He helped people believe in themselves, even if they were poor.
The Wrath of Grapes Boycott 1986
Both Martin Luther King Jr. and Cesar Chavez used economic boycotts as a way of peaceful protest.  The boycott is an economic tool to bring about a change.  When people refuse to buy a product or a service because it is unjust then something must change.  In this situation Ceasar Chavez was protesting the use of chemical pesticides on grapes and other fruits.  These fruits are hand picked by latino workers in the field.  The chemicals were causing great harm to the workers and their families.

We have been inspired by Cesar Chavez and Dr. Martin Luther King, Jr whose philosophy of nonviolence and peaceful protests brought positive changes to society. They inspired many people. They helped people believe in themselves.
How have you encouraged someone to believe in themselves?
There is no need to continue when they have asked for forgiveness, the conflict ends when one wants if you keep giving sparks the problem is going to get bigger. – Adolfo 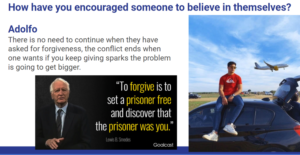 “No matter what battles come your way, never give up on anything. You only live once and patience is key!”  This quote from a very successful Pakistani Cricket player who has become the Prime Minister.   He inspires me because he won the World Cup byt then he took his talents off the pitch to politics.  Today he is encouraging Pakistani citizens to be patient in this time of pandemic and slow economy.  LINK    – Noman 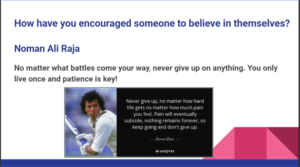 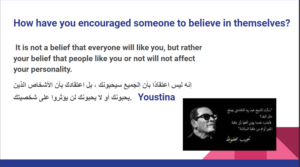 Well, helping in your problems to solve calmly so that you can give confidence and so you can believe in yourself.
Today students listened to police officers speaking about good relationships in the community.  One of them was born in my home country of El Salvador.  He shared his story.  His message was to stay calm and confident and grateful for the opportunity to be free.   -Jonathan .


I have a friend who did not know what he wanted with his life.  I encouraged him by saying that nothing in this life is easy unless you do your part and keep going and never give up, and fight for your Dreams. – Maikol 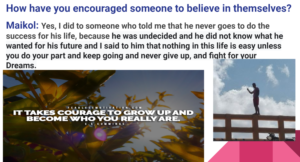