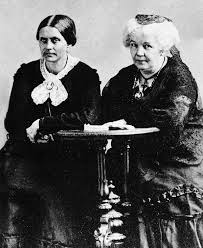 I declare to you that woman must not depend upon the protection of man, but must be taught to protect herself, and there I take my stand.

The best protection any woman can have… is courage.

Susan B. Anthony was brought up in a Quaker family with very strict traditions and was a well known abolitionist.  Susan was not allowed to speak at temperance rallies, so acquaintance with Elizabeth Stanton, led Susan to then dedicate her life to the women suffrage.  Suffrage is the name given to the political right to vote.  Together they organized the first women’s rights convention at Seneca Falls, New York in July of 1848.

Women were concerned about issues such as social values, slavery, and the rights of children.  It was not until November 2, 1920 that over eight million American women voted for the first time in history. Susan and Elizabeth fought really hard so that women can vote and voice their opinion. They never got the chance to cast a ballot themselves because it took 144 years and the ratification of the 19th Amendment for women to receive full citizenship.

Why was there so much conflict with women voting? Women should have been able to voice their opinions more freely just as well as men did. There is no political difference between the two, just that men are men and women are women. Women mature and become responsible quicker than a men do.  In fact women are the first teachers of American citizens as mothers and historically women have had many household responsibilities.   Think about the difference a woman’s vote could have made if they were allowed to vote in the 1800’s. Why were they so judged? They took care of American households so they should have had every right to vote in order to voice their opinion with no hesitation.