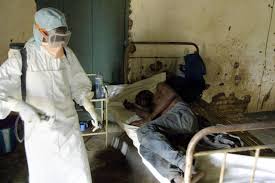 This New York Times article (posted on October 3rd, 2014) discusses a medical scare and the slight possibility of Ebola spreading in the United States. A cameraman, working for NBC news crew contracted the life threatening disease while working in Liberia. He currently resides in Texas and is said to of stopped over at Dallas Airport. This information has the public’s stomach churning. The 33 year old man was forced to enter quarantine for 21 days when he began to feel the illness take over. Fortunately he is expected to recover because of the constant medical attention he is receiving.

This epidemic is truly unfortunate. Ebola has eliminated approximately 3,300 lives within West Africa, so far. I believe that it’s completely idiotic that the media is sending the public into an obvious, unnecessary frenzy, but hey, that’s the media for you. I highly doubt that the virus will spread state wide. It only makes sense that the cameraman got infected. He was surrounded by several, coughing victims in a poverty stricken area. Even if an individual is to contract Ebola, you have multiple, well funded organizations looking after you. Plus, the virus is fairly difficult to contract. There are many infections, viruses and diseases out there that have absolutely no cure. It doesn’t mean that we should completely ignore the issue, but I believe we should be focusing a little more on the issues that we CAN’T fix.

The core democratic values demonstrated in this article is the value of life. Thousands of lives are at steak and are in danger.

Overall, I think that it’s a magnificent thing to finally hear about third world countries in need of help instead of singular multimillionaire celebrities dying. It’s great to be informed about things that actually matter. Nobody chooses to get sick and nobody chooses to die. Not a single human being deserves any form of suffering. I sincerely hope that each individual with Ebola gets the medical attention they deserve