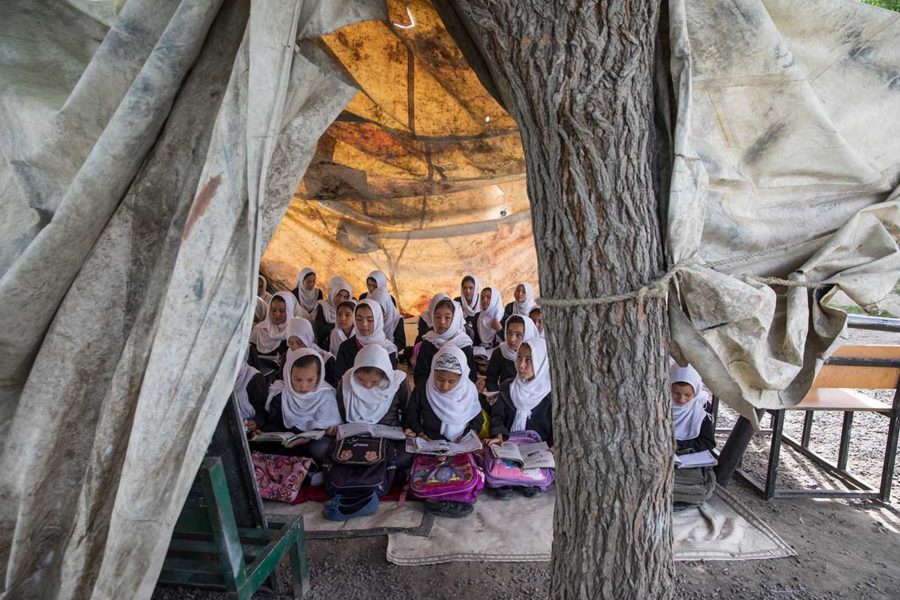 Girls study in a tent held up by a tree in a government school in Kabul, Afghanistan. Forty-one percent of all schools in Afghanistan do not have buildings and even when they do, they are often overcrowded, with some children forced to study outside. © 2017 Paula Bronstein for Human Rights Watch

Progress in the 20th Century

Education in Afghanistan was improved under the rule of King Zahir Shah between 1933 and 1973, making the primary schools available to about the half of the population who were younger than 12 years of age and expanding the secondary school system and Kabul University. By 1978, women made up 40 percent of the doctors and 60 percent of the teachers at Kabul University. Beginning with the Soviet invasion of Afghanistan in 1979, successive wars virtually destroyed the nation’s education system. Most teachers fled during the wars to the neighboring countries. In the middle of 1990s, about 650 schools were destroyed or used as bunkers. In 1996 the Taliban regime restricted education for females, and the madrassa (mosque school) became the main source of primary and secondary education. Under the Taliban, women and girls were discriminated against in many ways, for the “crime” of being a girl. The Taliban enforced their version of Islamic

Sharia law. Women and girls were:

If women disobeyed these discriminatory laws, punishments were harsh. A woman could be flogged for showing an inch or two of skin under her full body burqa, beaten for attempting to study, or stoned to death if she was found guilty of adultery. Rape and violence against women and girls was rife.

The US invaded Afghanistan in October 2001 to oust the Taliban, whom they said were harboring Osama Bin Laden and other al-Qaeda figures linked to 09/11 attacks.  After overthrow of the Taliban in late 2001, the Karzai administration received substantial international aid to restore the education system. Around 7,000 schools were operating in 20 of the 32 provinces by the end of 2003. By 2006, over 4 million male and female students were enrolled in schools throughout Afghanistan.

However, at the same time school facilities or institutions were also being refurbished or improved with more modern-style schools being built each year, there were still significant obstacles to education in Afghanistan, many of which stem from a lack of funding. The obstacles to education were even more numerous for Afghan girls. By 2007, 60 percent of students were studying in tents or other unprotected structures, and some parents refused to let their daughters to attend schools in such conditions. A lack of women teachers was another issue that concerned some parents, especially in more conservative areas. Some parents were not allowing their daughters to be taught by men. In 2009, another concern was the destruction of schools by Taliban, especially schools for females.
Afghanistan is one of the countries worst affected by violence against schools, with 770 incidents of attacks on education in 2008. Violence against students prevented nearly 5 million Afghan children from attending school in 2010. Afghanistan saw 439 teachers, education employees and students killed in 2006-9, one of highest death rates in the world.
Afghanistan has very poor education system, because it has devastated by more than three decades of sustained conflict. For many of the country’s children, completing primary school remains a distant dream – especially in rural areas and for girls – despite recent progress in raising enrollment. In the poorest and most remote areas of the country, enrollment varies considerably and girls still lack equal access. The underlining reasons for low girls’ enrollment are insecurity and traditional norms and practices related to girls’ and women’s role in society.

Girls continue to marry very young in this country; a girl who is trained in doing the chores, being obedient, and who is kept a virgin, can be sold or traded without her concern. This is especially true in poor rural regions of the country. She is obliged to leave behind everything: her childhood, her friends, her family and her education. In some parts of the country, a shortage of schools and insufficient transportation are the main obstacle to education – a long walk to school mean a fewer children go. Geographical barriers, especially in mountain areas, also make it harder for children to reach classroom. Once children do make it, they often receive a lower quality of education. The majority of schools can not provide learning materials and until now most schools do not have classrooms.
On 05/08/2021, a bomb attack targeting schoolgirls kills at least 50 people.

In Afghanistan, I went to school for 9 years. During this time I witnessed lots of the problems and difficulties that female students were facing. They were in their home doing chores, they faced opposition from their parents to their schooling and restrictions on what they were allowed to do, and many were beaten by their father and brothers. If not criticized by their own families, they faced outside criticism of other people like “Why would a woman or a girl go outside without chaperone?” and many were harassed by men. In school, problems they faced were lack of learning materials, and those with financial problems could not afford notebooks, pens, etc. These were not the only problems: walking more than two miles from home to school in hot summer days, which I experienced, is extremely difficult. Poor families with very little economic resources arrange their daughters’ weddings at young ages from 15 to 17 years for money. Some families trade their daughters with money as the only concern. Middle class families can afford to let their daughters to go to school and continue their education and while rich people let their daughters continue their education outside of Afghanistan.

In Germany, I went to school for 5 years and I encountered a huge difference. German education standards and graduation rates are relatively high precisely because the German school system is so well structured and rigorous. They provided almost everything that a student needs from learning materials to transportation. The public transportation system in Germany is linked to the school system and student needs for transportation. Everyone has the right to quality education. Female students have the same right as male students, they go to school without out any problems or difficulties. Unlike Afghanistan they provide different ways of education in order to continue their education.