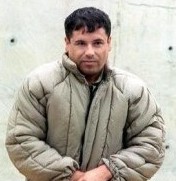 Joaquin Guzman Loera is the CEO of the Sinaloa Cartel in Mexico.

Joaquin Guzman Loera, Alias El Chapo Guzman, is one of the most wanted men in the world.  The reward being offered is 5 million dollars for information leading to his capture.

He has institutions between institutions that smuggle drugs into now more than three countries world wide, including  the U.S., and Europe. His drug dealing and drug revenues of his smuggling operations exceeds 3 billion dollars annually.

He was born December 25, 1954 in Sinaloa State, Mexico.  His father was a peasant farmer, and he was raised to follow that path. Instead, El Chapo Guzman took a step away from his father’s poor farming home, to become one of the richest men in the world. He is even listed on Forbes Magazine, as as one of the wealthiness people in the world. link below ☟

If you would like to know more information and full documentary stay connected to WWW.MTVIEWMIRROR.COM for more information I would provide in the following week. OH AND DONT FORGET TO COMMENT !!!!!!!!