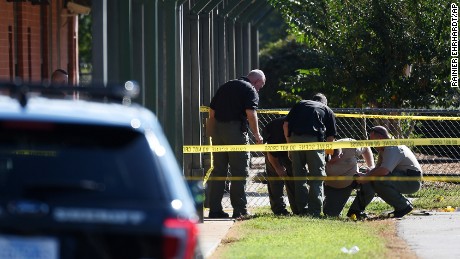 A teenage shooter opened fire at an elementary school in South Carolina, on Wednesday September 28,2016. Two students and a teacher were harmed. Students were given psychological counseling due to the traumatic event. One of the students shot was left in critical conditions. This elementary school didn’t have any security on duty, who could prevent this event from happening. The teen wasn’t recognized, until his grandparents arrived.
“The shooter’s grandmother said she received a call at 1:44 p.m. from the teenager. She said he was crying and upset and could not understand what he was saying, so she and the boy’s grandfather went to Osborne’s house, expecting to find their grandson as well. That’s when they found their son dead.”
The teen shooter was a home schooled boy. unlike some recent gun violence this act wasn’t based on racism. This teen was white and so were the victims. Not far from this dramatic at school the shooter’s father was found dead. There hasn’t been any proof that this teen also killed his father as their were not any witnesses. After this devastating event the teen shooter was taken into custody.
“We are heartbroken about this senseless act of violence,” Joanne Avery, the school superintendent, said at the briefing. The school district does training to prepare for active attacks, officials said.

A well regulated militia, being necessary to the security of a free state, the right of the people to keep and bear arms, shall not be infringed.  -2nd Amendment

This traumatic event for the students and their parents seems like a nightmare. The founding fathers who wrote the constitution could never have imagined our gun society where children are threatened at school by gun violence. For information on citizens who are standing up to gun violence in America CLICK HERE..

I’m a mother, if my daughter was in this position I would know the pain that these parents were going through when they found out about the shooting. Not knowing if your kid was the victim is hard, for the parents. I’m feeling their pain.

The school had to have security on duty. I believe every school needs to be protected. You never know what could happen.  In this case a firefighter who could have been a teacher or a parent took down the shooter. The shooter should stay in custody as he needs to pay for what he has done. He is a teen also but that doesn’t make any difference at this time. He needs to be convicted for years for this act. Schools need to have more security on duty to protect the people but we must also try to understand the causes of violent actions such as this.