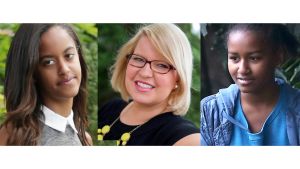 Elizabeth Lauten, the communications director for Tennessee Rep. Steven Fincher, resigned on Monday December 1, 2014 over criticism of Obama daughters during the annual White House turkey pardoning event. She wrote a mean comment on Facebook page to against the President, the first lady, and Malia 16 and Sasha 13 of their outfits and body language during the event.  The social media quickly made it a trend topic throughout the country.

Later, Elizabeth Lauten deleted the post and wrote another post to apologize for her comments earlier on Facebook for criticizing the Obama girls, but it was not enough. Many people got anger and wanted Elizabeth to get fire, and some of them considered Elizabeth Lauten cyber bullying children.

I think Elizabeth Lauten resigned is the right decision because it was not right to attack children on any of the social media.  For me, She is very immature communications director and incorrectly using the social media. If she doesn’t like the president, she can criticize his policies, his actions, and even his decisions, but definitely not his children. Children have nothing to do with politic. As a public figure, she should think carefully before she doing even we have freedom to speech. Sometimes, you just need to pay for it what you said.