Empowering People To Catch Up 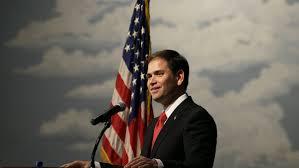 Marco Rubio was born in Miami, Florida on May 28, 1971 and is a proud bilingual Cuban – American who has the ambition to improve the government and raise it from its grasp of a democratic doom. His parents were immigrants who came to this country with dreams and hope for a better life than the one they had in Cuba. Marco Rubio understands what most immigrants are going through and truly believes he knows what should be done to fix the problems surrounding immigration. But ironically most Hispanics do not think so.

Marco Rubio wrote in his book about what conservative means to him, “Conservatism is not about leaving people behind. Conservatism is about empowering people to catch up, to give them the tools at their disposal that make it possible for them to access all the hope, all the promise, all the opportunity that America offers. And our programs to help them should reflect that.”

Marco Rubio isthe first Cuban- American to be the speaker of the House of Representatives senate, majority leader of the house and majority whips. He co-sponsored a bill that gave undocumented immigrant in state tuition for their kids. He is standing up for small business owners so they can  be able to grow and be successful. He is dedicated to reform the tax code and provide more jobs. He wants to protect senior citizens and veterans from unfairness and inequality that block them from the privileges they deserve and earned. He understands the true meaning of the American dream;

“The American Dream is a term that is often used but also often misunderstood. It isn’t really about becoming rich or famous. It is about things much simpler and more fundamental than that.”