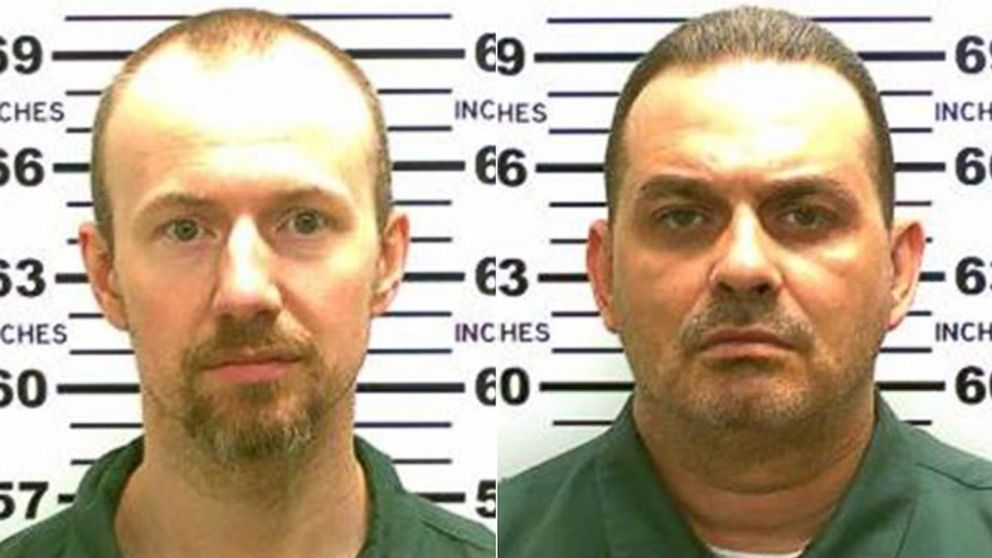 http://www.cnn.com/2015/06/07/us/new-york-escapees/index.html
Hundreds of authorities are scrambling to find two convicted killers who cut their way out of a maximum security prison in upstate New York with power tools.
Officials discovered Richard Matt, 48, and David Sweat, 34, were missing Saturday morning during a “standing count” of inmates at the Clinton Correctional Facility in Dannemora, New York, state police said.

The two men cut through a steel wall and followed a series of tunnels until they emerged from a manhole outside the prison walls.

“At first there was a little bit of a panic,” said Jimmy Black, who works at the Subway next to the prison, describing the hours after the killers escaped, “but once everyone realized the cops are out and constantly looking, everyone feels much more safe.”

Despite that sentiment, Gov. Andrew Cuomo is warning against complacency.

“These are dangerous people,” the governor said. “They are nothing to be trifled with.”

Matt was convicted on three counts of murder, three counts of kidnapping and two counts of robbery after he kidnapped a man and beat him to death in December 1997, state police said. He was sentenced to 25 years to life in prison.

Sweat was serving life without parole after his conviction of first-degree murder in the death of a Broome County sheriff’s deputy in July 2002, state police said.

The escape was the first out of the maximum security part of the prison, Cuomo said.

More than 200 law enforcement officers are scouring the area for the escapees. CNN affiliate WPTZ-TV in Plattsburgh, New York, reported that troopers and corrections officers are searching the woods in the area, and troopers have set up checkpoints on nearby highways.

“The guards are pulling people over and checking trunks to make sure everyone’s safe,” said Black, who commutes 10 minutes to work from Redford, New York. “They’re pretty helpful.”

This is entirely unsafe for the surrounding citizens. Having two murderers on the run therefore the democratic value of safety is compromised as well as the democratic value of promise keeping.  If you think about it, when the court puts someone behind bars its sort of an unspoken promise that they wont be a threat anymore and that they will be kept away from the normal population. The police, including sheriffs who guard prisoners are sworn to protect and serve. This is not protection. Somebody had to be in on this for them so be able to use power tools.
Delete Image
Align Left
Align Center
Align Right
Align Left
Align Center
Delete Heading