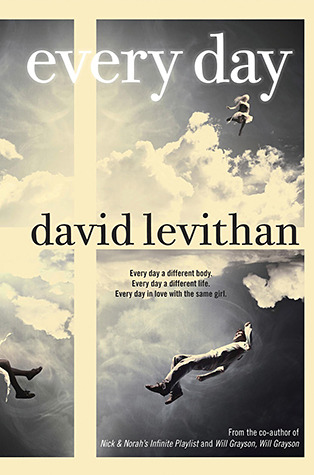 A is the protagonist of the story, A is not classified as a male nor female, nor lesbian nor gay. A wakes up in a body of somebody else every day for exactly 24 hours. A has until midnight to go to sleep or he will be painfully ripped out of their current body and into a new one. This has been A’s life forever and he used to think he was normal and the world was not normal but he soon realized that he is the one who isn’t normal. A tries to maintain the average everyday life of the persons body he is “borrowing” for the day by accessing the memories of that body and playing along great to friends and family. A soon runs into a conflict when he falls in love with a girl named Rhiannon who is the girlfriend of Justin which is the body obtained that day. A soon reveals his secret to Rhiannon who is the first person that has ever been told. Conflict rises when one of A’s ex-host remembers that he was not in possession of himself at a certain day when A tries to see Rhiannon again by traveling by road.

Readers who are looking for a love story will enjoy this story, the character A also experiences numerous lives that everyday people experience such as the suicidal girl, the lesbian, the trans man, illegal maid. A and Rhiannon connect with each other in different ways more mentally than physically which amazes me when I look at today’s society. Below I have listed qualities and values that everyday society faces as the human condition.

Authority: a value concerning what rules (or people) should be obeyed and the consequences for disobedience.

Example: A trying to get back home before 12 because those are the rules he set before he gets painfully ripped out

Equality:  a value concerning whether people should be treated in the same way.

Example: A possessing a lesbian treating the body the same way with equal respect

Liberty:  a value concerning what freedoms people should have and the limits that may justifiably be placed on those freedoms.
Life: a value concerning when, if ever, it is justifiable to threaten or take a life or risk the health of a life.  How does life get threatened or impaired by things like addiction or violence/abuse?

Example: A possessing an enslaved Hispanic teen a victim of human trafficking is forced to be a maid

Example: the body is the very first property anyone owns, violation of the body could result in bad consequences as A tries to maintain the everyday life and property of the body possessed.

Truth: a value concerning the expression, distortion, or withholding of accurate information.

Example: “you want me to doubt myself, but i am not the only one, you will see.” Nathan is telling A that he is the devil who possessed him for a day and wants the world to know…  Nathan is realising that he was decieved and taken advantage of for the benifits of somebody else

Although reading books is an activity I do not enjoy, everyday really grabbed my attention as I began to read it not to pass English, but because I actually enjoyed the story. The story had exciting moments that continued to build up drama and nail biting moments. The story becomes captivating and I genuinely enjoyed it although the ending might have had my blood heated because of the intense build up leading to a disappointing end.