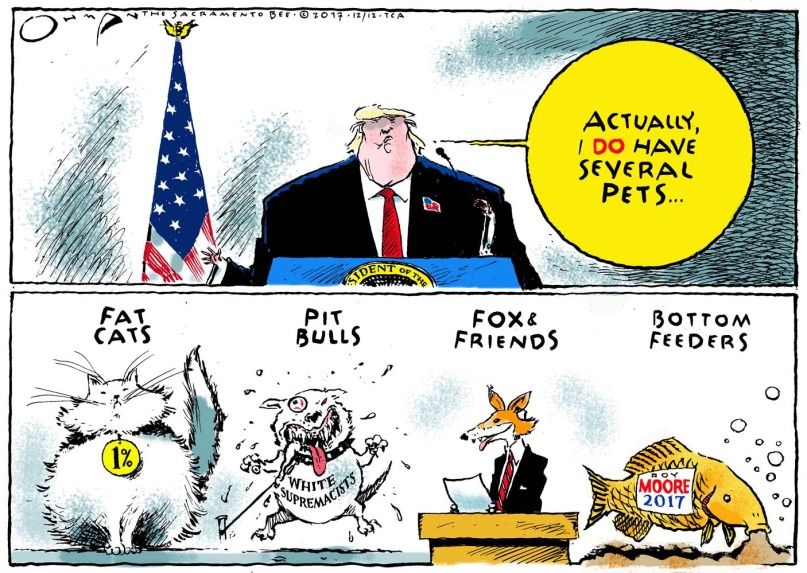 What does this cartoon say to you?

This image it is the best to represent how the president can control news.they use Sinclair, president can say to Sinclair what they can post in the news and what they cant put on the new paper.Than Sinclair communicate that to all the news companies that they own.All news have to put the same thing because the company that own them tel them to do it. Basically the president has all this news company has a pet, he can control them that what this picture mean. Control over all new.when one people have control over all new medias, he cans control what the population can or cant see on the news. Sinclair will do what they always do and only show part of the story to the community, the community  will believe because they don’t know all the story so they don’t know what going on.

Does a President shape of the way people think or act?

Who are the different animals pictured representing?

Fat cats: they represent the 1% of the people who is living good and healthy in Unites State, they are the rich people who take the money from the poor people.

Pit Bulls: Are considerate as a group of people who hate white people because of what they did or are doing. Pit Bulls people usually hate fat cats, they hate them because of all the money and freedom that the withe people take way from them.

Bottom feeders:Are the people who take anything do not mater what or how. they have to take it ,they may need or it is no more anywhere.They are the people that trump or presidents use to so port their power. they are at the bottom of society