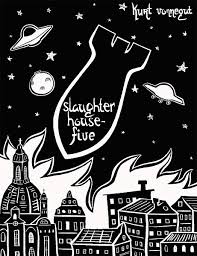 I thought Slaughterhouse Five was an extremely interesting and unique book, it was also enjoyable. Another main focus in the book besides anti-war was aliens and if time is really what we assume it to be.
I believe it was written “jumbled and jangled” because Vonnegut wanted to tell the story of Billy Pilgrim’s life along side of the story of the bombing of Dresden , and doing it out-of-order and jumbled gave a sense of disarray to the individual’s life that were affected by the war. Vonnegut wanted to write an anti-war novel and the jumbled aspect of it doesn’t shine a pleasant light on the war. Another reason was to add to the confusion in which Billy Pilgrim lives his life. Since Billy is trapped in a timeline which isn’t chronological the author wants the reader to understand how Billy perceives time and space, so he writes it jumbled and jangled.
“So it goes” was a motif throughout the novel that was said every time after someone would die, only Billy Pilgrim learned from the Tralfamadorian’s that nobody is really dead, they are just alive somewhere else in the universe and dead in that section of it. On Tralfamadore Billy learned that time is 4 diminsional,and that everything that will happen has already happened. The aliens compared the correct way to perceive time is like looking at the Grand Canyon where you can see everything that has happened and everything that will happen. So on Earth when someone dies they are only dead to that one instant but are still alive in the other times, hence the saying “so it goes.”
Acceptance is a major theme in Slaughterhouse Five because the characters are forced to accept death, hardships, and the unknown on a daily basis. Whether it is related to the war, or Billy Pilgrim’s time traveling, they all have to accept one thing or another.
There are many examples of irony in this book, one being how Billy Pilgrim seems to be all there to the people that are around him, but actually he is somewhere else in time entirely.

I enjoyed reading Slaughterhouse Five because it wasn’t your typical war story and added elements of sci-fi, which I enjoy. Aliens were brought into the story and also a whole new way of looking at time and how we perceive the world. I highly recommend this book.