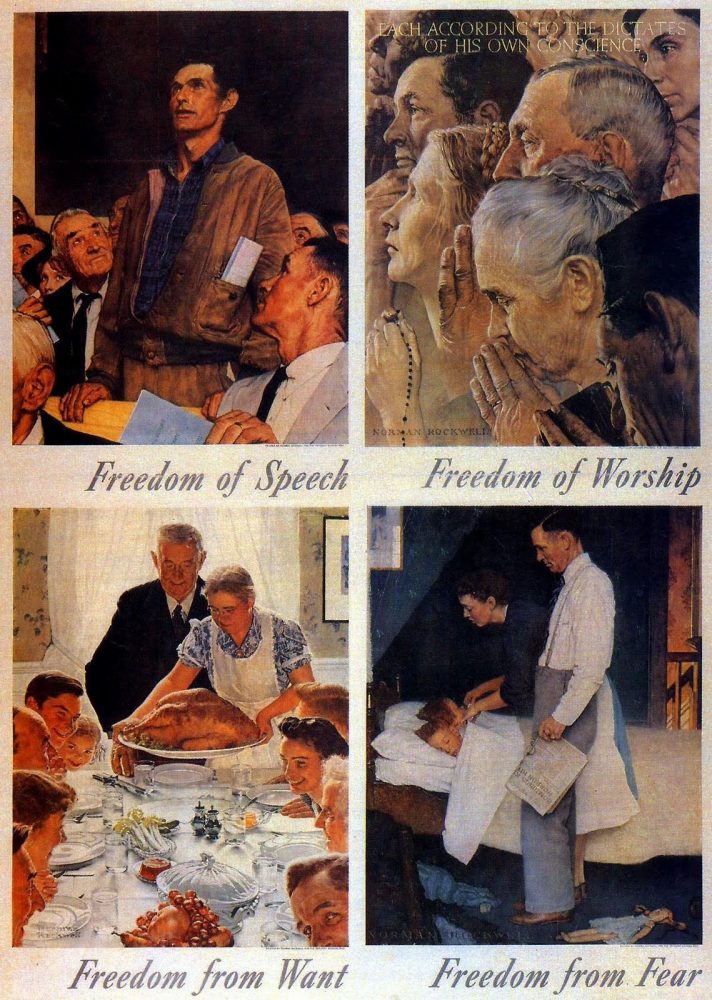 Norman Rockwell was a famous American artist in the 1940s and 1950s. He created this symbolic poster of FDR's "Four Freedoms".

The four freedoms consists of:

The first is freedom of speech and expression — everywhere in the world.

The second is freedom of every person to worship God in his own way — everywhere in the world.

The third is freedom from want, which, translated into world terms, means economic understandings which will secure to every nation a healthy peacetime life for its inhabitants — everywhere in the world.

The fourth is freedom from fear, which, translated into world terms, means a world-wide reduction of armaments to such a point and in such a thorough fashion that no nation will be in a position to commit an act of physical aggression against any neighbor — anywhere in the world.

The four freedoms address by President Roosevelt was basically his proposition of four fundamental freedoms that every american should have. Roosevelt had noticed the anxiety developing in the nation as Europe nations slowly fell into the hands of Hitler, and he felt the need to rally the nation to help America be a stronger interventionist against Hitler.

This was FDR’s state of the union address during the start of his third term. During this time America was on the brink of war. And President Roosevelt was trying to tell the government that America had to help Europe.  Basically FDR is saying that America needs to help other countries with maintaining democracy, for an example at this time Germany is jeopardizing the peace of the world by starting war over in Europe.  FDR is saying that Americas responsibility as citizens of the world, is to help protect the rights of people all around the world to maintain a democratic and peaceful environment to the Congress regarding his reasons of american involvement to help aid other countries such as Great Britain, and to greater production of war industries in the US. In this statement President Roosevelt believed that US should fight for universal freedoms that all people possessed.

I believe that the US joined in the war on behalf of the beliefs based off of FDR’s four freedoms. Mainly the second freedom, which is the freedom to worship god in his own way. We got involved because mainly the German Nazis were taking away the Jew’s of their rights to believe, and so in my opinion that is one of the main reasons why America got involved. As of today, I think that some of these freedoms are still being put to the test. But what actually provoked us into war was a surprise attack by the Japanese as they taken our fourth freedom rights away almost a year after FDR’s “Four Freedoms” speech, on December 7, 1941.

The freedom to worship God in your own way is being challenged even as of today. Like when Muslims are being persecuted by Trump just because of what they believe in. But the fourth freedom is the one most likely at risk because not only are we increasing our weapons, tensions are rising due to Trumps’ visions and belief. He is basically awakening the racism and division of Americans by pinning us against each other. By having us view each other by the color of our skin, and I believe that this will soon spread to become a worldwide problem. It’ll become a worldwide problem because people are already thinking about moving to Canada if Trump won and that is basically division at it’s finest, having Americans split up from each other. On the data from the poll made to see who would move to Canada, almost 60% of Hispanics would move because of how much racism they are receiving from Trump. We should follow what FDR stated in the four freedoms and make our decisions from then on.