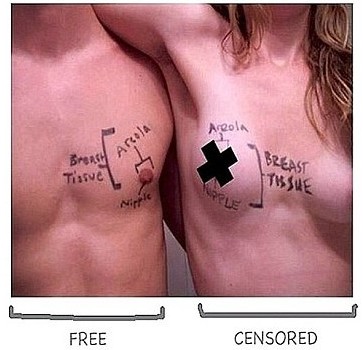 The act of breastfeeding is a natural thing that every mother has to do, whether it is straight from her breast or pumping her milk into a bottle for her child. However, lately it has become an issue when a mother sits in a public place to breastfeed. Many people disagree with this natural act, and they disrespect the mothers they see doing it by telling them it’s disgusting.  Also, people are getting upset over public breastfeeding by claiming that it’s inappropriate to have your breasts out, but there are celebrities being praised for wearing close to nothing all over the internet and magazines! Groups of people have now created organizations to help normalize breastfeeding.

There have been many social experiments where there is a woman showing off a lot of cleavage and a mother breastfeeding her child. One particular experiment that went viral shows a man walking up to a woman breastfeeding and says “Seriously ma’am do you have to do that here, it’s disgusting.” Now the real question here is why is it okay for a woman to wear a shirt that shows off a lot of cleavage, but it’s not okay for a mother to feed her baby in public? Also, there are so many stores such as Victoria’s Secret/ PINK, Soma, and Forever 21, that have giant posters of women in only their undergarments, but no one seems to complain much about that. Victoria’s Secret even has a fashion show where they have their “angels” walk around in very revealing lingerie.

On the other hand, many celebrities have taken a stand on this issue by posting their own photos of themselves breastfeeding their babies. We have seen breastfeeding photos from Pink, Miranda Kerr, Gwen Stefani, and many more. Other celebrities have also taken a stand on not just breastfeeding, but nipples in general. The campaign Free The Nipple has been on the rise with help from Miley Cyrus, Rihanna, Cara Delevingne, Kendall Jenner and many more. Free the Nipple is a campaign that is trying to normalize female nudity because when men are shirtless they don’t censor their nipples.

In conclusion, breastfeeding is a normal way to naturally feed children and it has been around since the beginning of time. It is not our job to shame women who are comfortable enough to breastfeed their child in public. If you think it’s okay for models to be posted up half-naked, then you shouldn’t have a problem with a mother feeding their child.  Hopefully, within the next 10 years nipples will be freed and breastfeeding will be normalized.